I have recently seen yet another question where I thought "hey, that should better be at codereview", and then went to close->offtopic->other site -> uhm, there was no codereview. And then I was unsure on what to do next. So I left it as-is, since it otherwise felt like a fine question. I shortly considered flagging it for moderator attention, but ultimately didn't. codereview is just an example, it can happen for a lot of other sites.

Reading various questions and comments here suggested that this would have been the right thing to do, but a lot also expressed they felt hesitant for various reasons. Among them are -- and I feel a little of them all too -- the following:

There are some question that deal with this, or similar issues, and have sometimes been declined, or as answers there you can find wishes for a new feature.

Some people here suggest that questions should just be closed as offtopic and not migrated at all; we currently have the possibility to migrate, and I think unless those people get the migration feature removed alltogether, we should improve migration as good as we can.

I propose that we add a last bullet point, just almost as proposed in Add "Flag as Other" checkbox to "Vote to Close as Off-Topic" dialog and More options when flagging for migration

Image from those answers is: 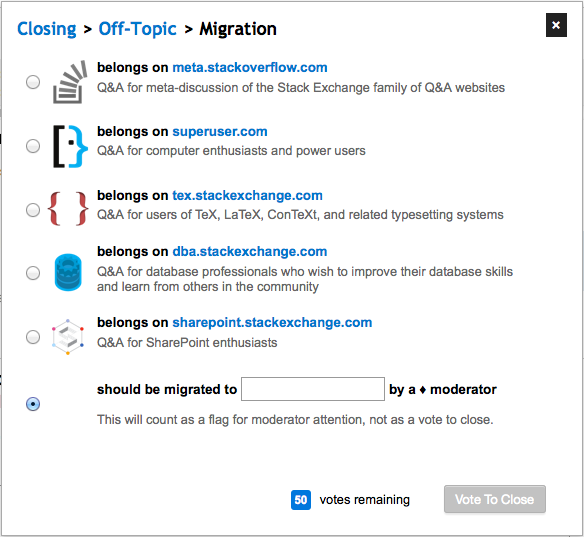 159
More options when flagging for migration
97
Add “Flag as Other” checkbox to “Vote to Close as Off-Topic” dialog
91
Migrate shortlist based on tags?
67
Update Migration Path List for Non-Moderators
79
Better “Flag for migration” interface
26
more flexible offtopic migration
5
For questions which might belong on maths, stats, etc, is is better to vote to close or flag for migration?

507
How about a “Vote not to close” option to counter the “Vote to close”?
365
Add a way for moderators to cast a normal, non binding close/open vote
32
Could normal users have an easier way to flag for migration?
100
Allow users to vote to close bountied questions
1162
Don't throw away all votes when a user is deleted
107
Add a “don't migrate crap” migration 'path' to all sites
236
Increase close vote weight for gold tag badge holders
294
Add optional box for spam flags letting you say why you think it's spam