I have read this but I can't seem to find the following answers...

How old is Stack Overflow?

What did the first version of Stack Overflow look like and how much has it evolved since?

Aesthetically it hasn't really changed. Visually very small, incremental enhancements have been added periodically. Most of the work happens at the functionality level.

How many days/months did it take to build the first Stack Overflow?

(That's a joke, AFAIK it started ~April/May and the beta launched end of July, so pre-beta work was ~16 weeks, and continuous additions and refinements since then).

Found under the entry "Stack Overflow Beta Design" is an early (pre-beta) image of the design.

This is what Stack Overflow used to look like back in the day.

Yeah we had enter all of our IP packets manually man. You kids don't know. 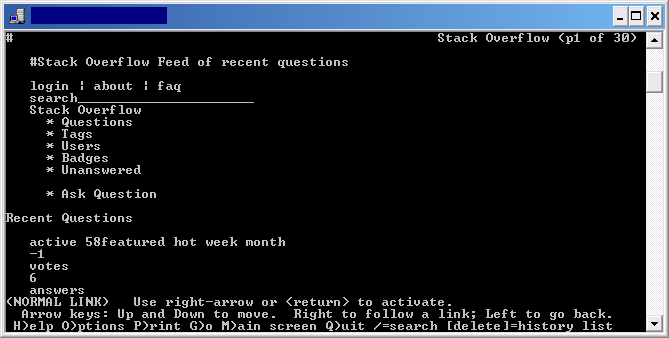 This whole black and white thing was pure luxury after the black-only monitor that I had before.

To add to the other screenshots, this is what Stack Overflow looked like when the public beta started on September 15: 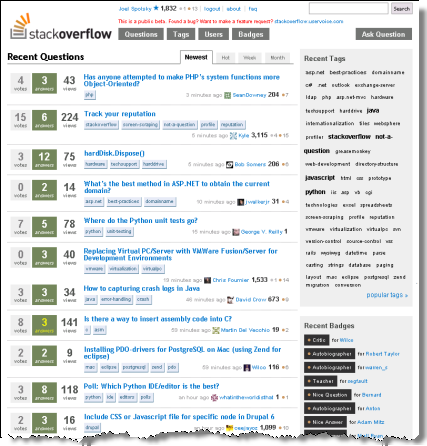 It looks mostly the same today - the differences I see are:

are there any more?

You can always check StackOverflow's age by looking at the Community User.

It was born the same day as StackOverflow.

I have located the earliest live version of Stack Overflow available from the Internet Archive: 2008-09-15T10:33:43Z. This is the public beta. (The preceding snapshot is of a math cartoon.)

Interesting tidbit: back then, the favicon had a white background; now it's transparent (Firefox 16 on Linux):

It didn't look like much (but I guess the CSS probably wasn't archived properly): 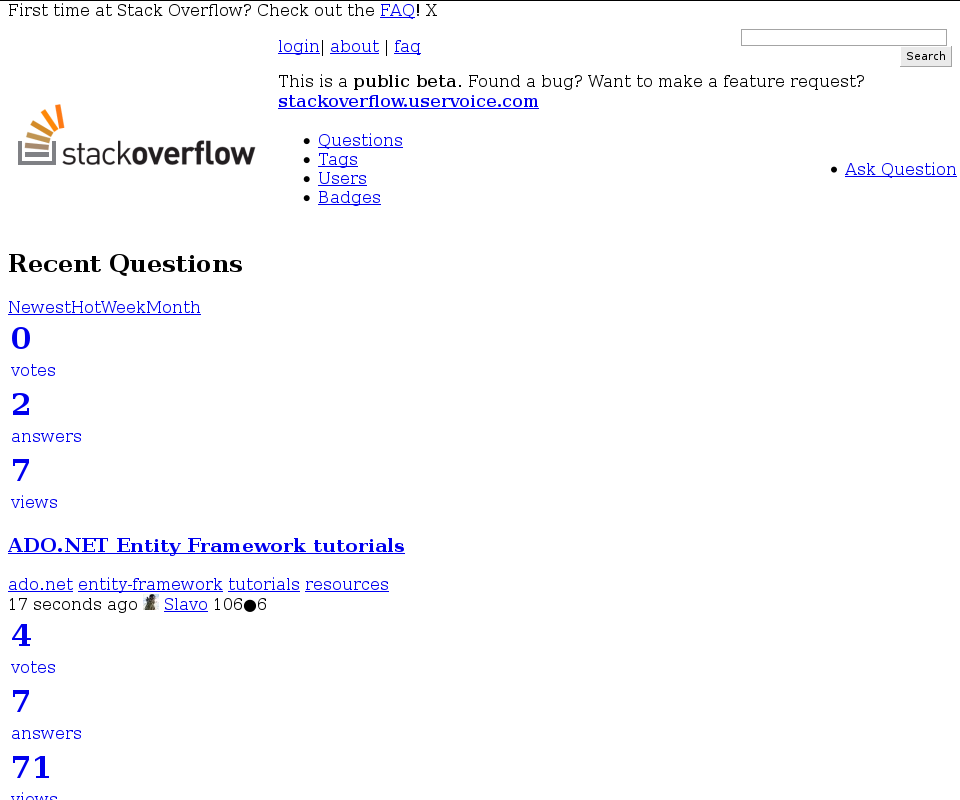 You should look at stackoverflow.com as it looked in the year 2000. Now that's interesting! (It redirected to www.mozquito.org; the company behind that project apparently was some Stack Overflow AG).

Not the answer you're looking for? Browse other questions tagged discussion stack-overflow stack-exchange-history .

921
Why aren't people voting for questions?
1491
Fastest Gun in the West Problem
1874
What is the XY problem?
2788
A Terms of Service update restricting companies that scrape your profile information without your permission
827
Net Neutrality and Stack Overflow / Stack Exchange
2502
Firing mods and forced relicensing: is Stack Exchange still interested in cooperating with the community?
719
Dear Stack Exchange: a statement and a letter from your moderators
2253
Stack Overflow is doing me ongoing harm; it's time to fix it!
1564
Thank you, Shog9
981
Firing Community Managers: Stack Exchange is not interested in cooperating with the community, is it?