As a result of another meta question highlighting suspicions of sockpuppety one user was recently suspended and another 2 were deleted. However, 3 hours before this happened (possibly knowing that the jig was up) the puppet master converted almost all their rep into a bounty. As a result of the 2 puppet's destruction the masters rep was set to 1 (and would have gone very negative if my calculations are correct. I believe to -218).

But the bounty remains. All that the master now needs to do is create a new sock, pick up the bounty of 350 clean rep and repeat the process, gaining 218 rep that we know to be fraudulent.

Is this acceptable? I know that bounties are rarely invalidated once started (at least on on topic questions) but in this case it is enabling fraud. Worse still, if invalidated would this return the 350 rep to the sock master.

After the one week suspention the bounty-cached sockpuppet rep was returned to the OP, assuming my reading of the rep change is correct 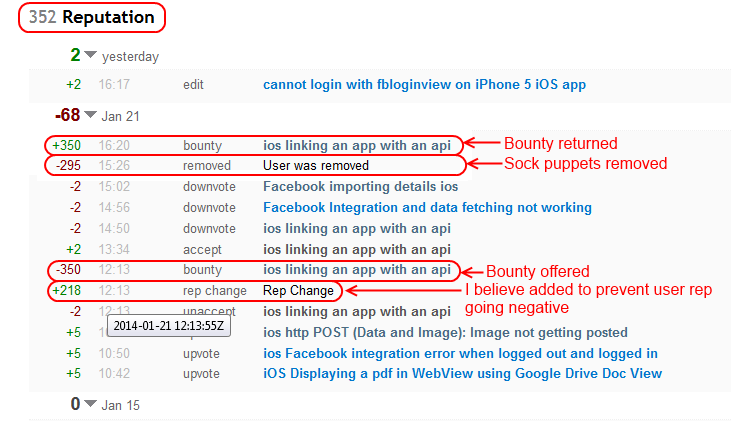 The times seem a little wrong, when I remember it from the time I remember "Rep Change" and "User was Removed" happening at the same time

This is one of those weird edge-cases that make bounties so... Interesting.

We've cleaned up the mess here; the effects were fairly benign. However, any accounts caught using this to intentionally inflate their reputation will be subject to removal.

Not the answer you're looking for? Browse other questions tagged discussion status-completed bounties serial-voting sock-puppets .