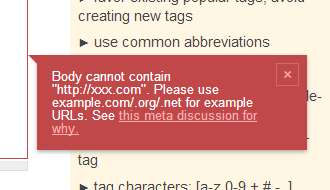 Not the answer you're looking for? Browse other questions tagged feature-request status-completed blocklist .

798
Recent feature changes to Stack Exchange
227
Ban LMGTFY (let me google that for you) links
80
Help users create dummy links that are not to unrelated commercial sites
14
Blacklist warnings aren't shown when editing comments
2
Warning when using a blacklisted tag - is it customizable?
4
Deliberate misspellings in titles to get around 'probelms' with banned words?
1
'bug' tag not allowed

653
Any way to send a personal message to another user?
863
Allow an edit to notify downvoters: "I think I've fixed the issue now - please check"
342
Allow downvoting comments
263
"You have gained power. Here's how to use it." kind of message
119
Ban URL shortening services
106
Pending approvals: allow for adding reasons to rejections
385
Send authors an inbox message if their question is closed
304
The future of meta.stackoverflow and meta.stackexchange
580
We're switching to CommonMark