Should we allow self-migration of questions? [duplicate]

Ask Question
Asked 12 years, 9 months ago
Modified 7 years ago
Viewed 335 times
25
This question already has an answer here:
Allow users to migrate their own question (1 answer)
Closed 6 years ago.

Should users be able to self-migrate a question if they realize that they've posted it on the wrong site? Should there be a reputation threshold before this is enabled?

Maybe have the question owner's vote worth 4 votes for migration votes, needing only one more to have it moved to SF/SU/SO/MSO would be a good idea.

If someone isn't familiar enough with the SO/SF/SU/MSO family of sites to post their question in the wrong venue, they probably won't be familiar enough to take advantage of any "self-migration" system (they either won't realize it even exists, or they'll likely misuse it).
I think the current method works fine, as the community usually stays on top of migrating questions to their appropriate venue.

A lot has changed since this question was asked. As James Thorpe points out, there are way more sites than there used to be and "oh, there's a site for that?" is not an infrequent reaction when people talk about migration.

Another thing that has changed is that we (now) have a way for a question owner to confirm a duplicate: somebody votes to close as a duplicate, the OP is asked "did that answer your question?", and if he says yes, the question is closed as a dupe. Maybe we could do something similar with migration: a vote to migrate could be confirmed by the OP (and the question migrated), or not and the community can close the question (or not) in the usual way.

There's one problem with this now: the site you want to propose migrating to probably isn't on the very short list of options available to close voters. We would need to modify that. We'd need a way to collect "write-in" votes that do not result in automatic migrations but do provide options to the OP. Perhaps like this: 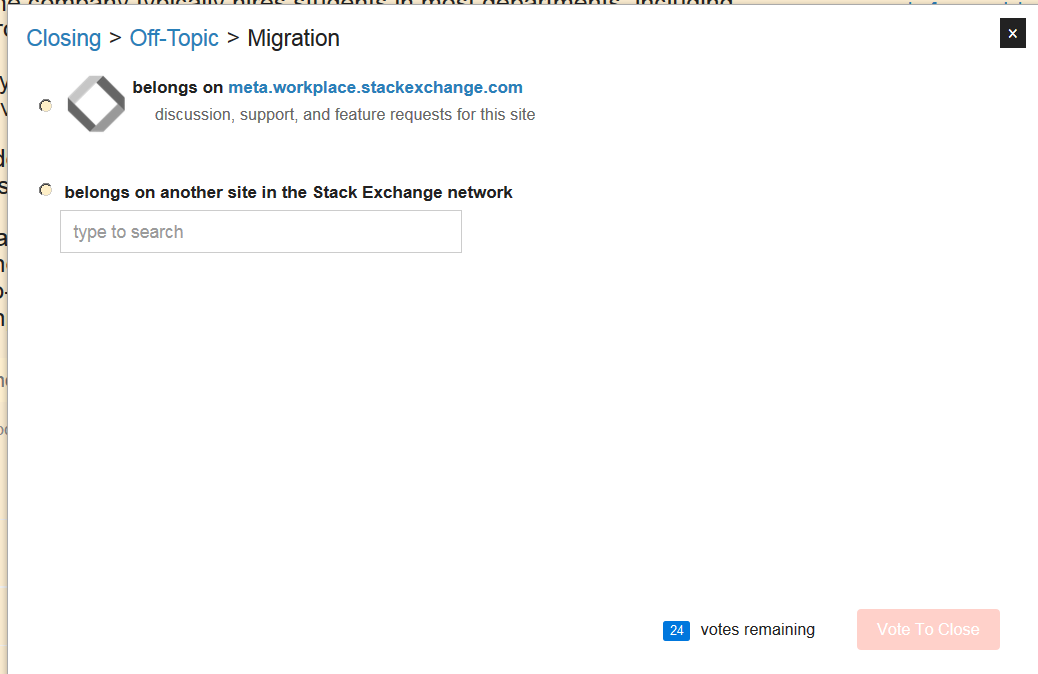 If a (non-moderator) close-voter adds a site that's not on the default list, that site is proposed to the OP in the same way that a duplicate is proposed. (If there are multiple proposals from different close-voters, do what we do for duplicates, which I assume is to present all the options.) If the OP concurs, migrate the question.1

Some have suggested that the OP should have to have an account, or a certain reputation level, on the destination site, but I'm not sure that helps. He could just delete and repost; migration, at least, leaves us with only one copy of the question. And if a question is migrated without the OP's involvement it already can come in with a phantom user, so that's no different here.

I also like the suggestion to just let the OP migrate it; I'm proposing this option because the other suggestion might require more design and implementation work (particularly UX).

1 Possible adjustment, based on concerns about common-but-bad migration suggestions: if past migrations from this site to that site have been rejected too many times (overall percentage? percentage over last quarter? a certain number in the last month? TBD), instead of auto-migrating, close the question locally and raise a flag for moderators about the migration. This allows good questions to still be migrated but requires review.

The number of sites on the network has grown a lot since this feature was proposed and the existing answers written, and it's sometimes hard to know about all of them.

I recently posted a question on ELL, when in fact ELU may have been a better fit. It's garnered a couple of close->migrate votes, but there's not enough traffic to make it happen, so the assumptions posted in the other answers that questions are migrated quickly doesn't really hold any more.

Given that I could just delete and repost the question myself on a different site, I think it makes perfect sense to allow the OP to migrate a question themselves.

Not the answer you're looking for? Browse other questions tagged feature-request migration .

1226
Encouraging people to explain downvotes
993
Show all of my question/answers to me even if they are deleted
213
What is migration and how does it work?
258
Reset votes on migrated questions
385
Send authors an inbox message if their question is closed
201
Can we allow 7.5K users to suggest tag synonyms without a score of 5 in the tag?
419
Decision on rejected edits should be displayed as a notification to the editor
1250
Don't throw away all votes when a user is deleted
182
A proposed philosophy of question migration