Improve the quality of comments with these simple suggestions

Twitter recently announced that usernames and urls will not count towards the 140 character limit per tweet. This sounds eerily similar to my proposal so I had to bump this. This idea was good for Twitter, why isn't it good for Stack Exchange?

We are currently afforded 600 characters to submit as a comment, which is quite a lot if you think about it as far as comments go. I do not know if this limit is a technical restriction or a decision to force users to make their points understandable in as few words as possible, or both.

Within comments, some choose to use markup tools, some don't. Those that do are met with a unique problem in that the markup characters themselves, along with any URLs they cite as references, count against the comment character limit. As far as URLs go, I certainly do feel that we should be encouraging users to cite references, whenever possible, to validate the point they are trying to make; however, if the process of citing your sources takes away from how many characters you can use to make your point, then we have a fundamental problem as this can inhibit users from clearly describing their point.

The following suggestions are to help users get the most out of the 600 characters without feeling limited when using the markup tools and would hopefully help reduce the number of consecutive comments that some feel circumvent the character limit rules that are currently in place.

I understand that we may not be able to implement all of these suggestions, or any of them for that matter; however, I wanted to at least document my thoughts on the subject matter to help improve the quality of the site, if not now, hopefully at some point in the future. Cheers.

Any character you enter in a comment counts towards the allowed amount of characters for a comment.

(not in any particular order)

If a user is uses markup in their comment, let's not count the markup tool characters when tallying the character count. The rule here should be that we only count the number of characters that are rendered, not the amount of raw characters used to create the comment. This way, the amount of characters allowed for every person is the same. If someone chooses to use markup in their comment, why should that count against them, especially when citing references (see proposition #2).

One caveat to this proposition is that we could instruct users to use short URLs, like those that are created for the 'share' features; however, I still feel that any URL included in the comment for citing purposes should not count against the user.

Benefit: This will provide many more characters to the user to provide a succinct comment, especially when they cite resources or references to support their statements.

Let's take a look at some Stack Overflow URLs that could be used in a comment. As you can see below, many of them are quite long and would have used up a high percentage of the comment character limit. I've calculated just how much of the character limit the URL would have consumed if a user added them to a comment. FYI, these URLs were randomly grabbed earlier today from the top questions list.

Let's not count the number of characters in a username that is specified using the @ notification tool when subtracting from the character limit.

Benefit: Granted we're talking a few percentage points savings in character limits here, but every little bit helps when you have a limited number of characters to start with.

Here are some statistics regarding display names that I think may be useful for this conversation.

Note: Spaces were removed from display names just like they are when used in comments for these calculations.

Counts of the lengths of Display Names: 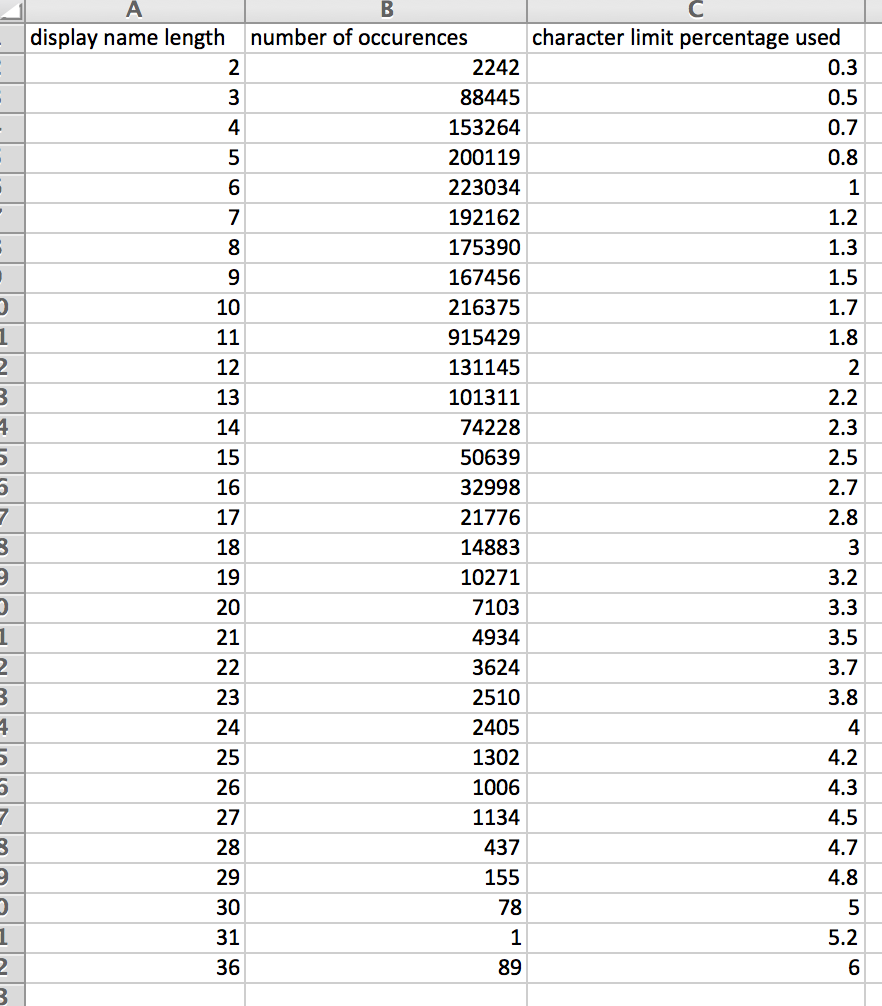 I wrote queries to gather this data. You can find these queries here: