TL;DR: To reduce the volume of edits requiring review, what if we allowed users to opt-out of the reputation gain for minor edits, similar to how the "community wiki" feature works? Alternatively, what if we flipped things on their head and said users had to mark a change as "substantial" in order to be eligible for the +2 reputation? This would weed out all the non-boosters right away so it should be easier to quickly reject obviously bad edits and clear up some of the confusion over when an edit should be accepted or rejected.

In terms of reputation, "community wiki" answers are effectively "donated" to the community. I often recognize minor mistakes to spelling, grammar, or formatting that do no deserve a +2 reputation award. I frequently fix mistakes in Wikipedia articles without expecting any kind of gain, and I would fix them on StackOverflow without the incentive.

I very easily recognize mistakes and can correct them in minutes, and I don't think that I'm anything special. I wouldn't be surprised if the majority of active users, like me, can fix spelling, grammar, and formatting issues quickly and easily after just a cursory review. Now, granted that every individual's motivations are different, the privilege that I most frequently miss is the ability to make trivial edits without review. It's not that I'm concerned my edits would be rejected-- quite the opposite, I'm certain it will always be accepted. But knowing I will be awarded the reputation for a matter of minutes (or less) per week, I usually either refrain from making edits or make substantial and arguably completely unnecessary edits just to say it wasn't a "minor edit."

All to say: I would rather fix the error and move on without gaining reputation than leave it unfixed, or make unnecessary changes just to get it through the review process. If there are lots of people like me, it seems to me that there's a large workforce untapped that simple rule changes could fix.

What if people in my category, who have a reasonable enough amount of reputation to show they aren't a robot, could make the minor edits when we find the mistakes missed because the question or site isn't popular, while giving up any reputation gain to be had? It seems to me that this would be one way to make the review process more about keeping malicious content out, when today a reviewer must determine both whether the edit is valuable (worth awarding +2 rep to someone) AND whether it is malicious (defacement, advertising).

Obviously other adjustments would have to be made to keep things balanced. If it is opt-in, something must be done to make users mark small changes as trivial, like a penalty for a non-trivial edit being rejected, and/or suspending the privilege if it is abused. You could automatically mark the edit as trivial if less than 25 or 50 characters were changed as well, for example, to prevent abuse.

NOTE: I recognize right off the bat two things that would make this unworkable: 1) If people would not make important edits without the reputation award and 2) if lowering the rep required for these kinds of edits would significantly increase the danger of malicious edits.

What if people in my category, who have a reasonable enough amount of reputation to show they aren't a robot, could make the minor edits when we find the mistakes missed because the question or site isn't popular, while giving up any reputation gain to be had?

That's a great idea! And we actually have something that does exactly this, IF there are more things that need to be edited in the post. Here's some art to explain it better. 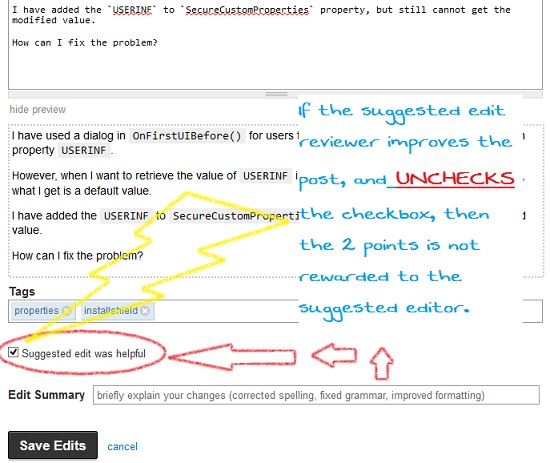 Since I've already answered more in depth on suggested edits, I will refrain from doing so here. Here is a link to the recent meta discussion on the suggested edit topic Suggested edit system is causing grief, needs to be rethought

Not the answer you're looking for? Browse other questions tagged discussion feature-request reputation review suggested-edits .

82
Suggested edit system is causing grief, needs to be rethought

297
How do suggested edits work?
417
Decision on rejected edits should be displayed as a notification to the editor
106
Allow non-bumping minor edits, but review them on /review
358
Reject an already-approved suggested edit when rolling it back
536
The current review system encourages fake reviews; some people upvote everything rather than actually fixing problems
305
Moderators should be able to manually ban users from suggesting edits
296
How do we encourage edits to obsolete/out of date answers?
2784
A Terms of Service update restricting companies that scrape your profile information without your permission
2482
Firing mods and forced relicensing: is Stack Exchange still interested in cooperating with the community?
2219
Stack Overflow is doing me ongoing harm; it's time to fix it!