What do to with ultra-sophisticated voting ring?

EDIT 3 Added a picture as a "proof" of what's going on (which may help other users catch such "advanced" voting rings):

In a twisted and weird way, now that my question has gotten 20+ upvotes here on meta, I was doing more edit reviews on SO and got this, from the same user which I know is gaming the system. The really sad part of the story is that there are already comments to this question saying: "I see nothing wrong". Yet everything is wrong. The entire account is fake and new accounts are create endlessly just to pump it's reputation up. And while doing so they're spamming SO (and Google) with poor content.

Take, say, the last paragraph (the other edits are golden too) in the original question (from a new, shill, account)...

Before: "how do i rename uploaded file name?"

After: "how do i rename uploaded file ins this II being whitespaces name?"

This is more than vandalism: it's gaming the system. Note that I'm sure that the new account is created by a shill: to accept edits and/or to accept the answer.

These fakes, ultra-low quality questions / answers are spamming SO.

The very reason I wrote "ultra-sophisticated" is because I knew there were going to be people looking into that account and saying: "Nothing to see here, move along, seems legit". 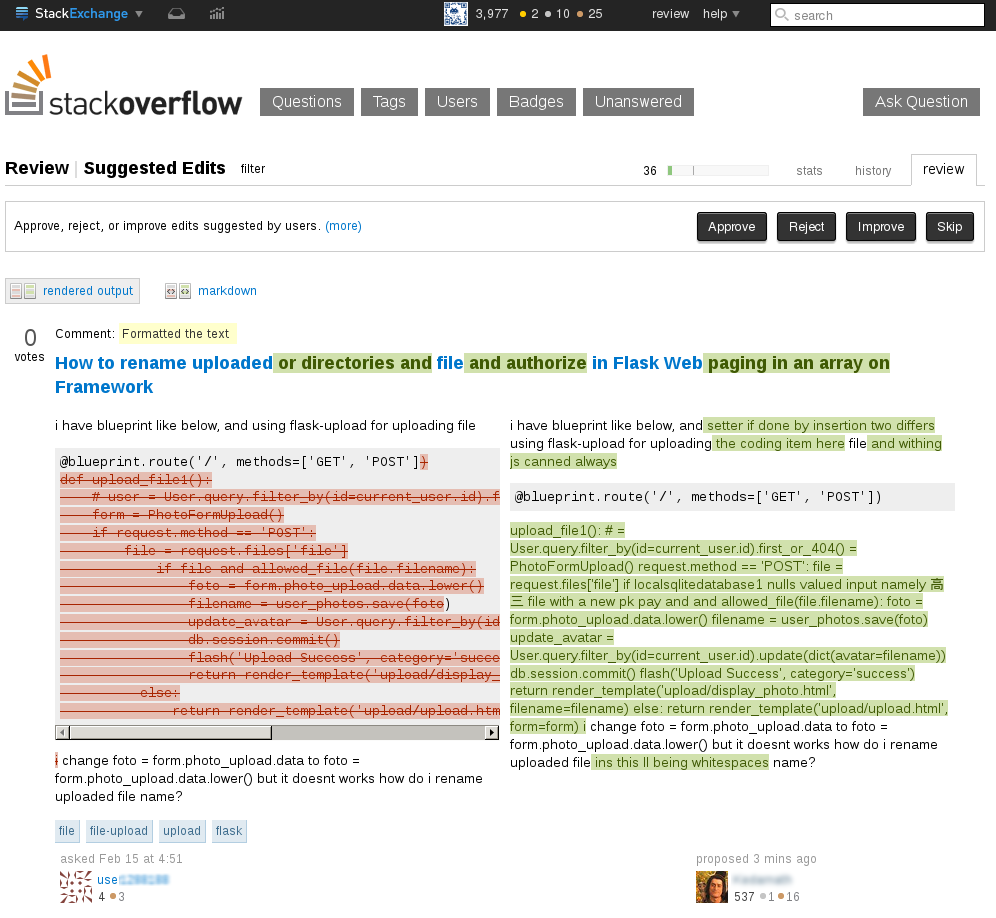 I see more and more ultra-sophisticated voting rings and they're getting scarier and scarier in that they are quickly gaining lots of rep.

It's always the same: I'm doing some edit reviews on SO (I've got about 4K rep on SO) and then notice some kind of vandalism. I don't know why the vandalism is done as these people seem to try to gain lots of rep quickly (sometimes with accounts created quite a while earlier) but I notice many shady things. I think I notice the vandalism because the edit is not actually vandalism but a way to quickly gain a few rep when the account relatively is new. The point of the edit may be to make tiny edits, change them a bit, and have several people (?) each gain 2 rep (is this even possible?).

What seems typical is that they're answering users with very low rep. What is nasty is that it seems to be mixed with real answers once in a while.

While I was writing this very post on meta (but I delayed its posting to get more "proofs"), here's an example of what happened (if that's not crazy, I don't know what it is):

The fake account doesn't care: its answer is going to get accepted anyway, despite the fact that for some of these fake questions there are several other answers, including answers by regular users with 2K or 6K rep etc. and their answers are not getting accepted.

Now I hesitate to post the account, because I suspect that most people will look at the account and say: "Seems of poor quality, but it's still legit".

I'll post one of the account anyway but I know many people will say there's nothing wrong, because the questions look scaringly legit (they're not: most of them are made up question with the sole purpose of allowing one of the account to quickly gain rep).

Just open the 16 answers he made and look at all the questions and all the comments between the person asking the question and that one answerer. This is not legit.

Most questions are poorly written, most are by new users, several have answers from other users with more rep yet it's the answer from that sockpuppet who's accepted, several questions are flagged as off-topic, on-hold, have downvotes, most have the exact same poor english and same punctuation mistakes.

That's 506 rep for a new account in a record amount of time (top 0.79% this week for answering poor questions, nearly all created by new user accounts and all sharing the same "style"). I believe the ring has users with way more rep than that and they're able to push new accounts reputation very fastly.

Note that this is just one account: in addition to most of the fake new accounts, there are also other account with quite some rep in this ring IMHO.

My "question" on meta is just what not to do with this particular account but what can be done so that these very sophisticated voting rings don't gain as much rep as fast.

EDIT 2 I noticed that there's also sometime a little delay between the answer and the acceptance of the answer, but it makes the fraud even more obvious: the last answer accepted (which I noticed just got accepted) for that user was on a question which had four answers (basically all good and equivalent). It's of course the one from the suspected account that was accepted by the (fake) new user account. That's the case for many of the question he answered.

No matter how sophisticated or clever (or unsophisticated), the answer is the same - flag for mod attention and explain. Or if it is too long to explain in the flag text box, then email the team via the contact us link in the footer of each page. As Tim Post suggests in the comments, using the "contact us" page may be preferable, so the SE team can address the issues quickly.

We all love to play "hunt the socks", and usually suspicions are accurate, but it is unfair to take suspicions to meta no matter how positive you are that it is a voting ring. In the chance you are wrong (no matter how slim), you could be unfairly directing negative attention at an innocent person.

Not the answer you're looking for? Browse other questions tagged discussion sock-puppets gaming-the-system .

-54
Would it better the community if we got compensated for posts? Even with minuscule alt coins?
8
Custom Mod Flagging for Suspicious Voting

906
Why aren't people voting for questions?
1813
Could we please be a bit nicer to new users?
584
Exit strategies for “chameleon questions”
704
Your answer is in another castle: when is an answer not an answer?
2781
A Terms of Service update restricting companies that scrape your profile information without your permission
444
Employee profiles are now marked with a “Staff” indicator
2453
Firing mods and forced relicensing: is Stack Exchange still interested in cooperating with the community?
2155
Stack Overflow is doing me ongoing harm; it's time to fix it!
952
Firing Community Managers: Stack Exchange is not interested in cooperating with the community, is it?