Are there any ads on the SE network? [duplicate]

OK, I hope this question is not that stupid, but this question has been haunting me for more than a short time. I did not see any ads on the Stack Exchange network, is it because I missed something or are there actually no ads on SE?

Originally, there were ads only on the three oldest sites in the network: Stack Overflow, Server Fault and Super User. You'll see fewer ads if you visit while logged into an account with more than 200 reputation. Nowadays some of the other high-traffic sites have ads; see What sites have advertisements enabled? for a list.

Some sites have ads chosen by the community, via threads such as this one. These are present on graduated sites (i.e. sites other than the SO/SF/SU original trilogy and “special” sites such as this meta site and other than the young sites that have a beta status) as well as SF and SU. SO has something similar with the restriction that only ads soliciting developers to participate in open-source projects are allowed.

There are ads shown to low rep users (see screenshot) but most of these are removed for users above 200 reputation. Meta sites do not carry ads even for low rep users. 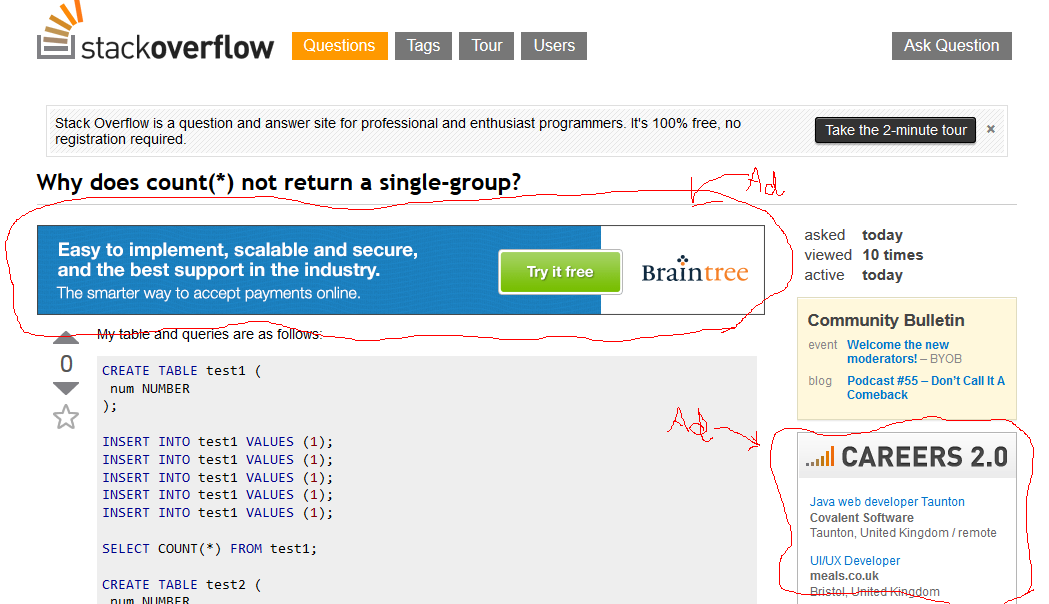 Yes, there are ads. At 200 reputation, you see less of them - that should be enough evidence they exist, though you might not be seeing them for a number of reasons on your side.

885
Why aren't people voting for questions?
1401
Fastest Gun in the West Problem
1767
Could we please be a bit nicer to new users?
2757
A Terms of Service update restricting companies that scrape your profile information without your permission
823
Net Neutrality and Stack Overflow / Stack Exchange
1034
Why is Stack Overflow trying to start audio?
2323
Firing mods and forced relicensing: is Stack Exchange still interested in cooperating with the community?
1943
Stack Overflow is doing me ongoing harm; it's time to fix it!
469
To reach out: on Monica, the Lavender community, and the future of the Stack Exchange network