Ask Question
Asked 5 years, 10 months ago
Active 5 years, 8 months ago
Viewed 115 times
21
Closed. This question is off-topic. It is not currently accepting answers.

As it stands now, the "disagree with a flag" option is, unintuitively, buried in the middle of a bunch of "agree"-like options. This has confused at least a few other people:

For the sake of UX, I would like to see the disagree option somehow separated from all the rest, and preferably use the same word to provide a better cue to the user. A couple ideas on how:

Plus, "I am flagging this answer because it has invalid flags" sounds borderline counterproductive/oxymoronic. I've heard some people say that "flags don't do anything in and of themselves", (which I'm not sure on—I've been told too many spam/offensive flags automatically deletes a post) is merely a behind-the-scenes quirk; that distinction is irrelevant to non-mods. 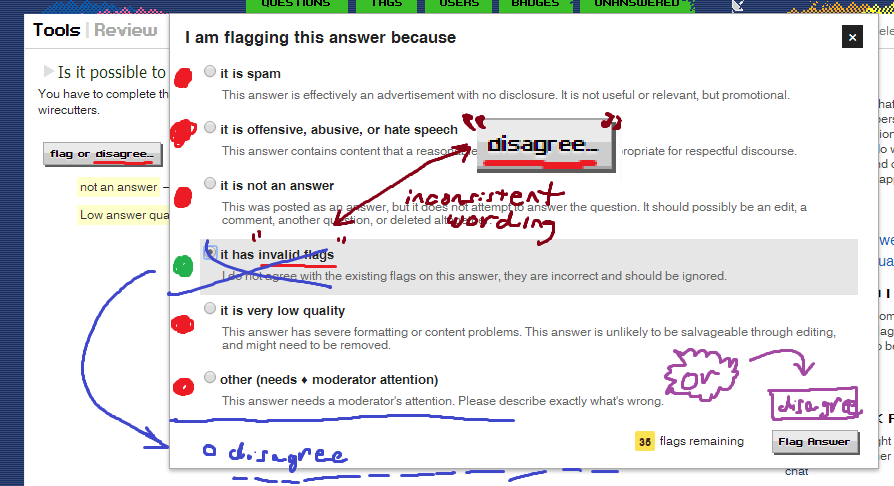 I think option 1 (the hr and moving it to the bottom) is the right one. Disagree is a choice equivalent to the others, so it shouldn't be an entirely different button - we're not trying to encourage people to disagree, which is what a button would do - but it should be separated from the other reasons so it's visually distinct and harder to accidentally choose a flagging reason when trying to disagree with flags.

I completely agree. It's very unintuitive. I think the first option is the best. The hard rule will make it clear that there is a separation between the two areas. Perhaps the text for the disagree section can be in a different color as well to make it stand out better.

Not the answer you're looking for? Browse other questions tagged feature-request review flags user-interface usability .

121
Let's get rid of the 10K flag queue
22
10k+ users can see flags now, but can't unflag
19
How to disagree under the [Flag or disagree…] review dialog?
7
Flag or disagree won't let me disagree

507
How about a “Vote not to close” option to counter the “Vote to close”?
3
Why do “disagree with flag” votes have to go through a moderator?
92
Allow moderators to reverse and/or nullify flag decisions
81
Allow voting on comments from Review interface
522
The current review system encourages fake reviews; some people upvote everything rather than actually fixing problems
78
Show the post's comments on the “Suggested Edits” review interface
381
The robo-approvers are killing my will to review edits
19
How to disagree under the [Flag or disagree…] review dialog?
376
Add an “I don't understand” option for review audits
12
flag option in the 10k tools review should act the same as “flag or disagree”