Browsing for (junior) JavaScript jobs on careers (hint, hint…) I found a few that I'd like to apply to, but browsing the job page there seems to be no way to actually apply (for clarity this applies to iPad Air/iOS 7.0.6) for positions, due to the lack of an 'apply now' button: 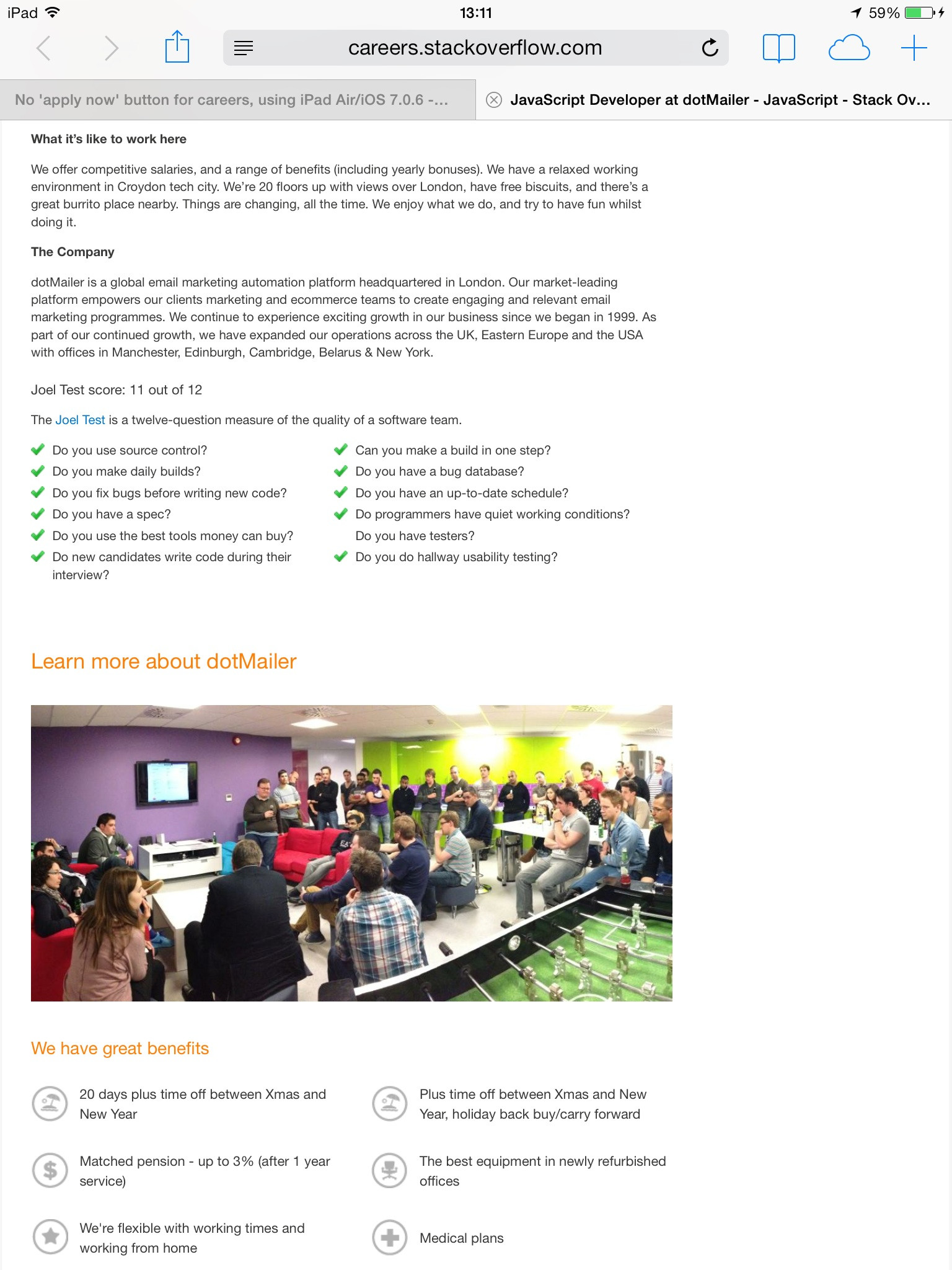 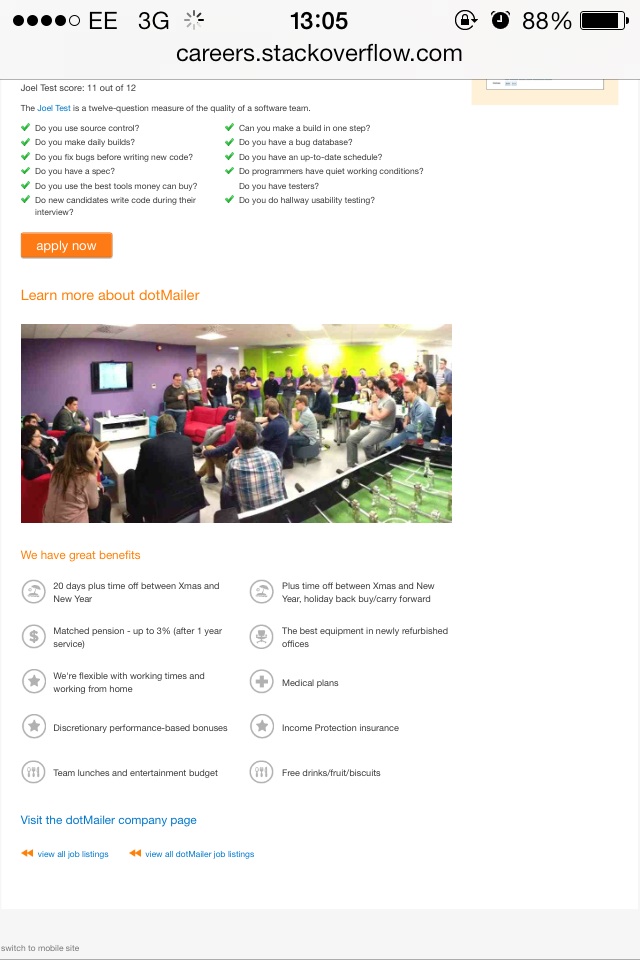 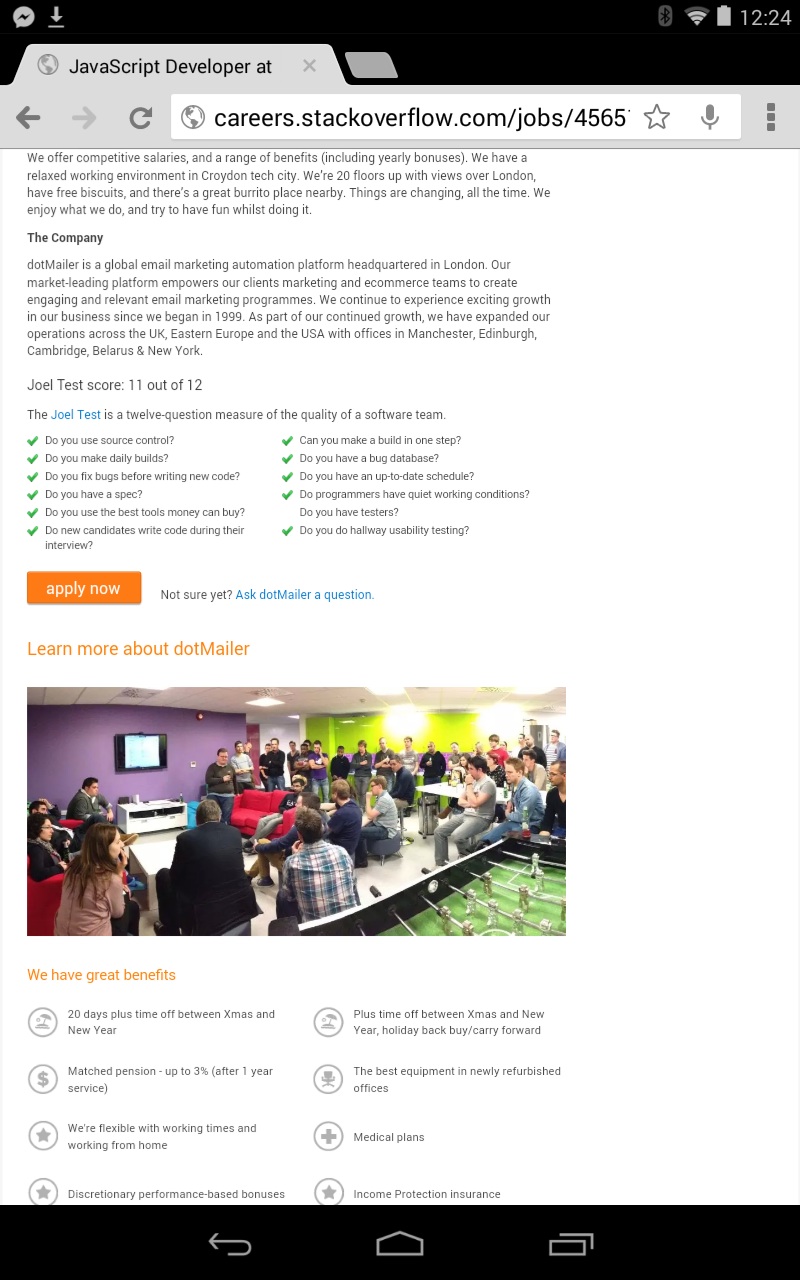 Link to actual job page (though it's true of all job pages that I've browsed on iPad): http://careers.stackoverflow.com/jobs/45651/javascript-developer-dotmailer?a=TFVhlEhW&searchTerm=JavaScript

Incidentally, I have previously flagged this problem via the in-page 'report a problem' facility (around, or slightly before, 17/02/2014) and received this response:

Thanks for showing your interest in this position: http://careers.stackoverflow.com/jobs/485341

You should be able to see the "apply now" button at the bottom of this job listing. Can you try a different browser if you aren't able to see that?

Cheers,
(Name removed, since I don't think it's fair to potentially embarrass someone)

1: Note that this is an entirely different job, though it shows the same behaviour.

We don't really support applying for listing on mobile devices (phones and tablets). On phones, the site should default to the mobile theme (which hides all application functionality) and this illustrates a reason why we should do so on tablets as well.

Currently applying form a mobile device is in the "if it works, it works, but we don't explicitly support it" realm.

I am not a dev, but I could have sworn part of that reason was the way iOS handles documents. Android should fare better but I don't have a device I can test it with.

So in regards to your issue, this may be a bug in the classic sense, but it's not a bug we're prepared to spend time fixing since we don't support mobile application anyway.

I've marked it as status-deferred for now. While we have no immediate plans to allow mobile applications, we'll probably have to revisit this issue on the future since we've started releasing our own SE mobile apps.

Not the answer you're looking for? Browse other questions tagged bug status-deferred careers ipad mobile-safari .