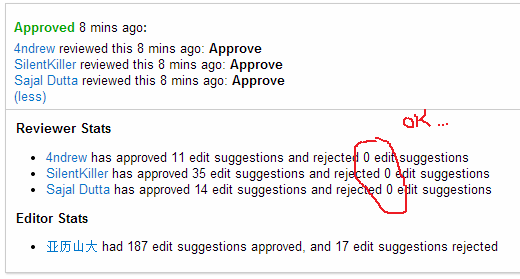 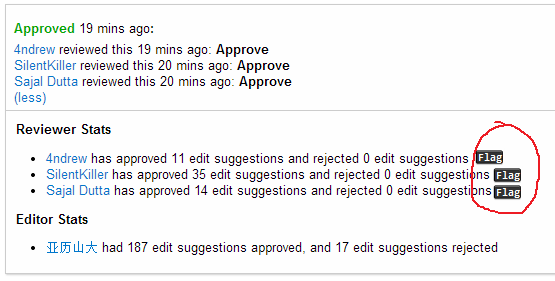 4
Flagging incorrectly approved edits
87
Give new edit reviewers some audits to begin with
53
Spam-polishing audits
2
How to report bad reviewers
8
Add a way to warn editors to do more substantial edits
1
Is there an algorithm in Stack Exchange that promotes quality reviews of edits?

305
How do suggested edits work?
168
Add escalation system to chat flags
420
Decision on rejected edits should be displayed as a notification to the editor
540
The current review system encourages fake reviews; some people upvote everything rather than actually fixing problems
133
Bring a "human factor" into review audit composition/selection
53
Change edit approval threshold to (# approve − # reject ≥ N)
308
Moderators should be able to manually ban users from suggesting edits
165
Allow all reviewers to see deleted posts they reviewed
422
Can a machine be taught to flag spam automatically?
241
Review queue workflows - Final release