How can we make the code formatting button more discoverable?

Today, after being on StackOverflow for five years, I have discovered the { } button, after reading some blog post. My life was changed.

Well, not exactly, but it did make it a lot easier to indent code in questions asked by SO beginners. Before today, I would copy/paste the code in a local editor, indent, then paste back. That, even though I was visually aware of the button since I clicked the "image" icon to its right many times to paste or insert images.

And I'm not the only one who's missed that button for a very long time.

One way to alleviate the problem is to make said code button less easy to overlook. How can we make it more easily discoverable?

feature-request code-formatting editor
Share
Improve this question
edited May 23, 2017 at 12:35

When you paste, a little message pops up suggesting if it's code to press the code button. Example: 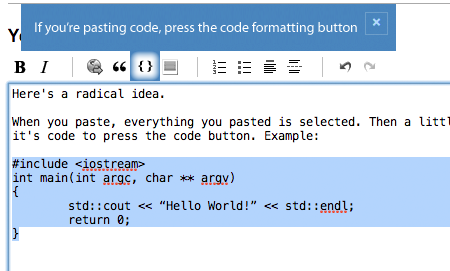 The argument being: code incorrectly formated is usually (but admittedly not always) pasted from an external file.

I had made the argument that pasted text should be selected by default, but that's seen some disagreement from a UX standpoint. Selecting only on press of the code button could work equally well. If the button is pressed and no other changes have been made, then select and indent the pasted code.

As with most helper messages (such as consider leaving a comment after a downvote), this would stop appearing after some metric that the lesson has been learned.

I think the best way to make it stand out and be more recognizable would be to simply make it a rectangle that said "CODE" on it.

Another option is to mention both the button and the keyboard shortcut in the "Code" dropdown that appears when you click the big "?" help button in the editor and on the help page.

Edit: An entirely different approach could be to give editors the option of leaving an instructional comment describing Ctrl+K and the button when they make a code formatting edit. The details of this would need some discussion, but initial thoughts:

A little overkill, maybe, but another possibility.

As it stands, though, I'm not sure if this is actually an issue. Plenty of new users don't format their code, but the community's edits respond well enough when poorly indented code is encountered. Additionally, you don't really see high rep users posting unindented code, which implies that everybody eventually figures it out with the current button look and placement.

I have seen it in some apps, can't recall which ones now.

Perhaps there could be some fuzzy logic for detecting when pasted text is code. Stack Overflow already has magic formatting code that determines which programming language your code should be formatted as... why not take it a step further and:

Oh, to get back the hours I spend reindenting HTML and curly-braced code...

Not the answer you're looking for? Browse other questions tagged feature-request code-formatting editor .

852
Can we have the ability to retract a close vote before it closes?
380
How do I format my code blocks?
628
How do I escape a backtick ` within in-line code in Markdown?
15
Stack Overflow won't let me post code, I don't have proper "formatting"?
18
Can we get a toggle button in the post editor that lets us use the Tab key to insert 4 Spaces?
419
Add an "I don't understand" option for review audits
309
Goodbye, Prettify. Hello highlight.js! Swapping out our Syntax Highlighter