Why do I get a Japanese message when I update by swiping down?

I have a question. I use SE application on Android Nexus 5 4.4.2 and usually access SE site using it whether I can answer or not. At that time, I can see the refreshing message in Japanese once per 24 hours when I update by swiping down like attachment where the message is the middle of the screen shot. I think the application is not supported, and I usually see them in English, which is fine. 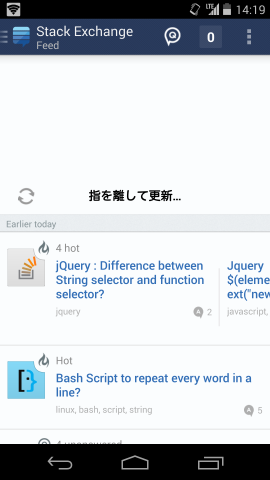 That's because the pull-to-refresh library we're using is localized. We do try to set the language for the app to English, because for an app that is not translated (all the content, menus, etc. are in English), I find it extremely annoying if some things suddenly appear in a different language (for me, that would be German). The same thing is true for things like dates – "This question was asked vor 2 Tagen" is just horrible.

Unfortunately, Android makes it really hard to opt out of automatic localization (which seems to be a policy of Android in general; not just in apps – it's close to impossible for me to find English play store reviews, for example, or to read the app's original English description instead of the horribly unreadable German machine-translated version).

And because Android makes it so hard, there are some edge cases where a localized thing can appear. I hope we catch all of these at some point, but currently these edge cases exist, and what you're seeing is one of them.

When/if the app is ever translated to different languages, we'll obviously change these things, but right now the app is English-only, and we'd rather have it completely English instead of a weird multi-language hybrid.

Not the answer you're looking for? Browse other questions tagged support bug android-app security .

139
Why do votes get locked?
21
Does the OP of a question get a message in the inbox when I update my answer?
8
When will my reputation update?