When I try to submit an edit in the iOS app it returns this message: 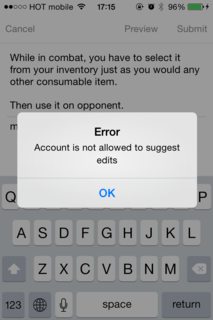 What happened and can it be fixed please?

Starting at December 5th 2014, this has been implemented/fixed. Kudos!

As the error message hints, it's not really editing but rather suggesting an edit, meaning you don't have full edit privilege on that site.

The problem is that the Stack Exchange API simply does not support sending edits to the queue at the moment, as described nicely in an answer to the same report for android app:

The Stack Exchange API (which our official app also uses) doesn't offer the ability to submit your edits into an edit queue, so if you don't have enough reputation to flat out do an edit (in which case on the site you'd just be allowed to edit, but it'd go into the queue for validation), you get an error message.

When the API will support it, the app developers will add that feature at some point.

What has three digits and doesn't barf when you don't have full edit access? Stack Exchange for iOS version 1.2.1!

The new release of the app is snaking its ways through Apple's CDNs and onto you phone. Expect to see it in the next 24 hours. This has two key features for edits:

1210
Encouraging people to explain downvotes
860
Allow an edit to notify downvoters: "I think I've fixed the issue now - please check"
1086
Should 'Hi', 'thanks', taglines, and salutations be removed from posts?
424
What is a 'rollback'?
417
Decision on rejected edits should be displayed as a notification to the editor
203
More descriptive "User was removed" explanation
358
Reject an already-approved suggested edit when rolling it back
12
Don't show the edit option when I can't really edit (mobile apps)
362
New three-tiered badge idea: Explainer →Refiner → Illuminator
296
How do we encourage edits to obsolete/out of date answers?