In iPhone → Settings → Stack Exchange → Notices → Quantcast Management, the text near the end is messed up. 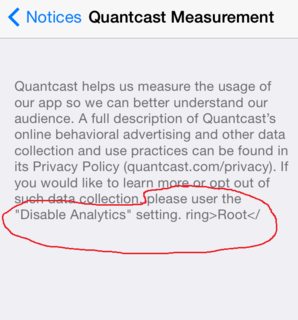 These notices are implanted into the Settings bundle from source text during our build process. I fixed the typo on "user" (should be "use"), but the source text doesn't have the stray xml markup, so there's probably a scripting problem somewhere. I'll get this fixed soon.

Update I'm still not entirely sure what the problem was. It was some kind of bad interaction between the shell and PlistBuddy's Import command. I changed the relevant build step to avoid Import and it seems to be working now, and it should be apparent in the next build (0.1.50 or later).

Not the answer you're looking for? Browse other questions tagged bug status-completed ios-app terms-of-service .