Can room owners have an option to add users to blocklist?

Can we have a feature where room owners can add users to block/black list so that they cannot chat in the chat rooms?

Yes, I am aware that the chat rooms are open to anyone, and they should be, if somebody is pissed off, they can surely add the user to the ignore list, but what if the things go out of hand sometimes?

I came up with this question because since yesterday we have a user in HTML/CSS/WebDesign room called Illaya (No personal grudges anyways), pings random users for no good reason, and the most annoying thing is that he flags the posts which are not even spammy or offensive... I would attach a screenshot here.. 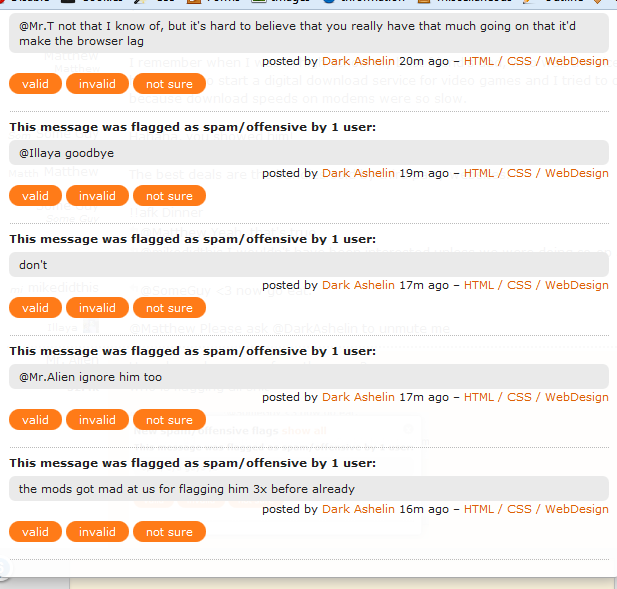 And then he says that he clicked them by mistake. Now the case is edgy, doesn't happen often but would be better if owners got rights to block users, wouldn't this help with the current issue, will also result into less mod intervention, because generally, new users do such stuff.

Anyways we have rooms which can be switched to gallery mode, with owners deciding whom they can provide access, but switching general discussion rooms into gallery is not a good option as many users drop in for help.

If not the block list than can we have a feature where we can disable a particular user to write, or flag or any kind of similar options rather than switching entire room to gallery mode and accepting too many write access?

Any of the below would suffice

If a user misbehaves in such a way in one chat room, odds are that he'll misbehave the same way in other chat rooms as well. So locking him out of one room is unlikely to achieve much. You're only solving the problem for your own room, and not for the other rooms the user might go if he can't enter your room anymore.

The correct solution is to suspend the user from chat, so just flag for moderator attention and explain the problem.

There is another issue, and that is that room owners are appointed in a rather random fashion. I'm not entirely comfortable to give almost random users the power to block individual users from a chat room.

Not the answer you're looking for? Browse other questions tagged feature-request chat .

1161
Don't throw away all votes when a user is deleted
28
Room owners should not be throttled in the Chat systems
161
Flags in chat are defective by design
83
Impose a re-entry delay on users kicked out of a chat room
3
Should a notification be sent to chat room owners when someone requests access?
59
Notify room owners when a user is kicked
322
Toward a philosophy of Chat
375
If you're gonna talk Politics, you must respect those who disagree