On Board & Card Games, I have over 500 rep and can close questions - if I'm using the website.

On the Android App, however, this doesn't show up in the question options. It's usually the last item on the list. 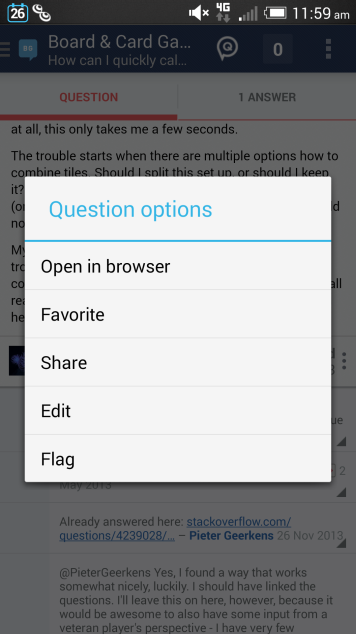 Well that was a fun one.

The API was screwing up loading privilege reputation level overrides, which for historical reasons is how most of the different privilege levels in betas work.

There was another, unrelated it turned out, issue with caching the can_* fields that control that bit of UI. It was possible, if you requested exactly the right set of fields, for the API to serve a request for can_* out of a previously cached response. I don't think that happened in your case, but it was discovered while investigating your problem.

Fixes for both went out in the most recent API deploy. You don't need to update your app or anything, it should just work now.

Not the answer you're looking for? Browse other questions tagged bug status-completed vote-to-close android-app beta-sites .

258
“You have gained power. Here's how to use it.” kind of message
2
Tapping a comment from a nonexistent user crashes the app
11
The app needs word wrapping!
3
Tapping a comment from a deleted user is reliably crashing the app
12
Android app's Achievements view doesn't show +2's from tag wiki edit approvals
15
The Android app no longer has a close option for questions