What is the typical growth pattern of a new beta site in the first few weeks?

However, I've noticed that many other, older beta sites have a large number of questions but few questions/day. I assume that they, too, grew fast at the beginning and then slowed down.

My question is, what is the typical pattern in terms of questions and answers per day in the typical new beta site? Do they tend to follow the same statistical model? Most importantly, is there a difference between those that succeed and those that fail, or does it not show up until later?

I'd like to know so that if and when the questions slow down, we'll have some perspective on what is normal and what is not.

This is a typical growth pattern for a Stack Exchange site. The scale is highly variable but most sites go through similar phases. 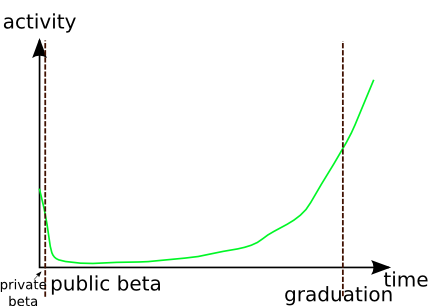 rolfl wrote a Data Explorer query which shows actual examples (see a few recently-graduated ones here). The initial slump is not always visible at this scale.

What you don't want to see during the beta is the long-term growth tapering off. There may be exceptional events and seasonal variations, but after smoothing these off, you should see the initial activity reduction slow down and then growth happening at a faster and faster rate (in mathematical terms, activity should be a convex function).

Some data to complement the sketch given by Gilles. I picked two recent graduates and two beta sites that are just about to graduate. The graphs show posts per day. I used moderate smoothing, trying not to lose the sharp peak at the beginning. 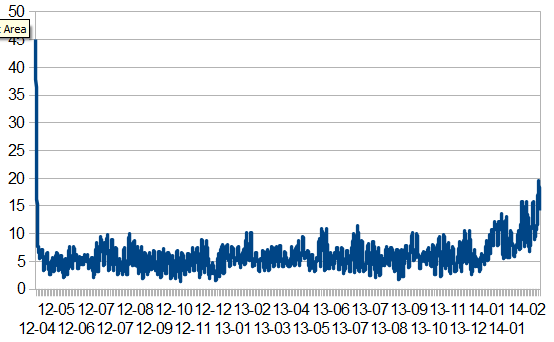 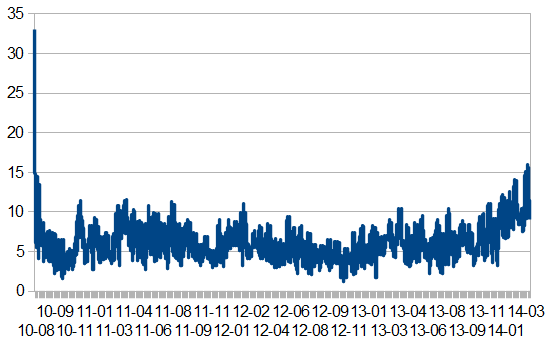 Graphic Design is getting its own design.

Academia will get one on 6-8 weeks 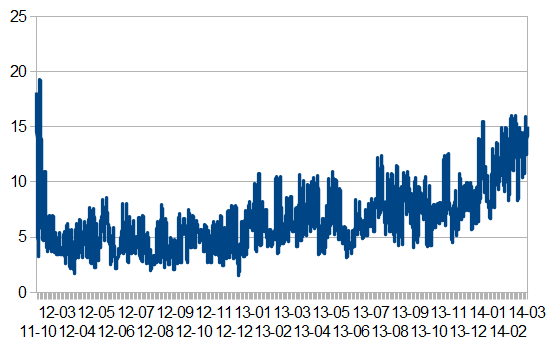 Not the answer you're looking for? Browse other questions tagged discussion beta-phase beta-sites .

409
Graduation, site closure, and a clearer outlook on the health of SE sites
103
Should we rename or remove the "beta" label?

1490
Fastest Gun in the West Problem
409
Graduation, site closure, and a clearer outlook on the health of SE sites
2788
A Terms of Service update restricting companies that scrape your profile information without your permission
494
Congratulations to our 29 oldest beta sites - They're now no longer beta!
2500
Firing mods and forced relicensing: is Stack Exchange still interested in cooperating with the community?
719
Dear Stack Exchange: a statement and a letter from your moderators
2251
Stack Overflow is doing me ongoing harm; it's time to fix it!
572
Change in roles for Jon Ericson (leaving SE)
420
Update on the ongoing DDoS attacks and blocking Tor exit nodes