How can the community effectively respond to a problematic user during private beta?

I'm part of the private beta for Mental Fitness SE. While MFSE is probably going to be closed after private beta anyway (let's be honest, good answers are hard to come by about mental performance), I've noticed a particular problem user, and I believe this is an issue which may have affected and/or will affect many other private betas in the future.

I'd just like to say that this isn't a plea for retribution against said user. I'm just curious how the community should respond to such users and address their behavior in future private betas.

I'm going to use MFSE as an example, but I intend to inquire about the generic case: What do we do when there is a problematic user poisoning the environment of a private beta? This user's activity composes, I'd estimate, at least 30-40% of the site, and most of it is poor quality content.

This user doesn't break any rules, but their behavior is actively harmful to the community. We are three days into private beta.

User 1: If you would like the site to succeed, take into the account the excellent advice you are getting from Shog and Abby here, and most of all please read some of the documentation thats present, and follow it.

During a discussion prompted by a user saying "We need to address these concerns" without specifying what they are: 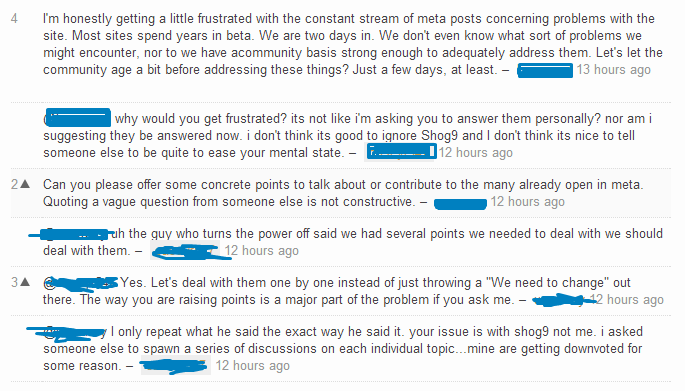 While a user was trying to explain why their posts are received negatively:

User 1: I think you should listen to the feedback you're getting from users. Your meta posts are all at zero or below, and you have quite a number of answers receiving heavy downvotes.

Problem User: funny would you like your posts to be called spam [User 1]?

User 1: If my posts were being called spam, I would consider why people think them to be spam, and then reconsider the way I ask questions.

Problem User: listen to our feedback as we cuss you...good luck with that

yeah this is a great answer

Under an answer that consists of two massive blockquotes and links to an abstract and Wikipedia article:

User 1: It would be super helpful and make this answer much better if you summarize key points from the block quote. Thank you!

Problem User: naw a sentence is enough and if they want to know more they can read the abstracts.

They have been asked to stop asking for upvotes on posts, asking if people have downvoted their posts, etc., but continue to do so:

Anyway, I could go on, but I think you get the point. The user is not receptive to feedback from other users, and doesn't seem to respond to polite requests. Additionally, over the past three days, this user has turned slowly more hostile and unengaging.

Here's the problem, though. While this user has not broken any rules, they are still poisoning the formative stages of a private beta.

The fact of the matter is, we need to deal with this user somehow. The normal advice in a situation like this is "ignore and move on," but we don't have a user-base large enough to feasibly do this. Additionally, the poor quality answers do occasionally receive upvotes, which disrupts the community's still-undeveloped conception of a good answer. For this beta, and in the future, how do we handle users who are actively harmful to the formative stages of a private beta?

This is not a problem with that user. Yes, he posts a lot, and yes, it can be annoying. But the typical reaction to things you disagree or find annoying on meta is downvote. I don't think he is actively harmful, he just tries to do what he (and probably only he) thinks is correct.

The problem is somewhere else: there's very little activity in that private beta. That makes possible for single user to dominate the site.

In my opinion, having bad questions and answers in private beta is generally not a bad thing. You just downvote that stuff and show other people, what is accepted and what is not. Borderline questions are defining the topic.

But something else is crucial: to have a lot of good stuff. Mental Fitness, as for now, is missing that stuff. Maybe, if there were more activity on both main site and meta, that problematic user would limit his activity. Because there's a great void, he feels irresistible need to fill that void, even if his method of feeling it is, well, imperfect.

So my advice: just use "regular" means to deal with it. Use upvotes. Flag or vote for close if you feel it's necessary. If the community is active enough, the problem-makers will be overruled. If the community cannot cope with single user, it's a bad sign for the chances of the site to survive.

884
Why aren't people voting for questions?
1401
Fastest Gun in the West Problem
941
What are “Community Wiki” posts?
806
The Many Memes of Meta
2757
A Terms of Service update restricting companies that scrape your profile information without your permission
477
Congratulations to our 29 oldest beta sites - They're now no longer beta!
2321
Firing mods and forced relicensing: is Stack Exchange still interested in cooperating with the community?
1942
Stack Overflow is doing me ongoing harm; it's time to fix it!