"Home" button - does not refresh "viewed" state of notifications

When I first get on the SO site I will have reputation notifications like "+5" and click it and it shows the unread stuff that happened while I was away like "+5 rep for up-vote of this question.", if I navigate to another page (for example clicking on that notification to take me to the page I got +rep from) it loads the "viewed" property of that notification, realizes that I've already read it, and does not display it. But then if I click the text in the top left corner of the page (beneath the tool bar) saying "StackOverflow" (to the left of the Questions Tags Users etc. buttons. it takes me to the "home" page but does not re-check the "viewed" property of that notification and it displays a new notification (even though I've already seen it!)

If i restart my "session" by say opening a new tab and going to SO home page URL this does not happen, so it is something that occurs when clicking the "StackOverflow" text to go home.

You're seeing bad behaviour of Safari, which boldly shows cached content while it should revalidate at the server. Next, if initially the HTML already included the counter (rather than the counter being updated using a web socket), like:

...then somehow clicking through to any page within 60 seconds after it was initially loaded, will again show the counter value from the cached HTML.

Now, to make things complicated: Safari's Web Inspector claims the content is not fetched from cache. But using Wireshark reveals that within the first 60 seconds it does not make new requests, and in Safari's Web Inspector one then sees that the dates in the response do not change when clicking the logo, despite the label "Cached: no": 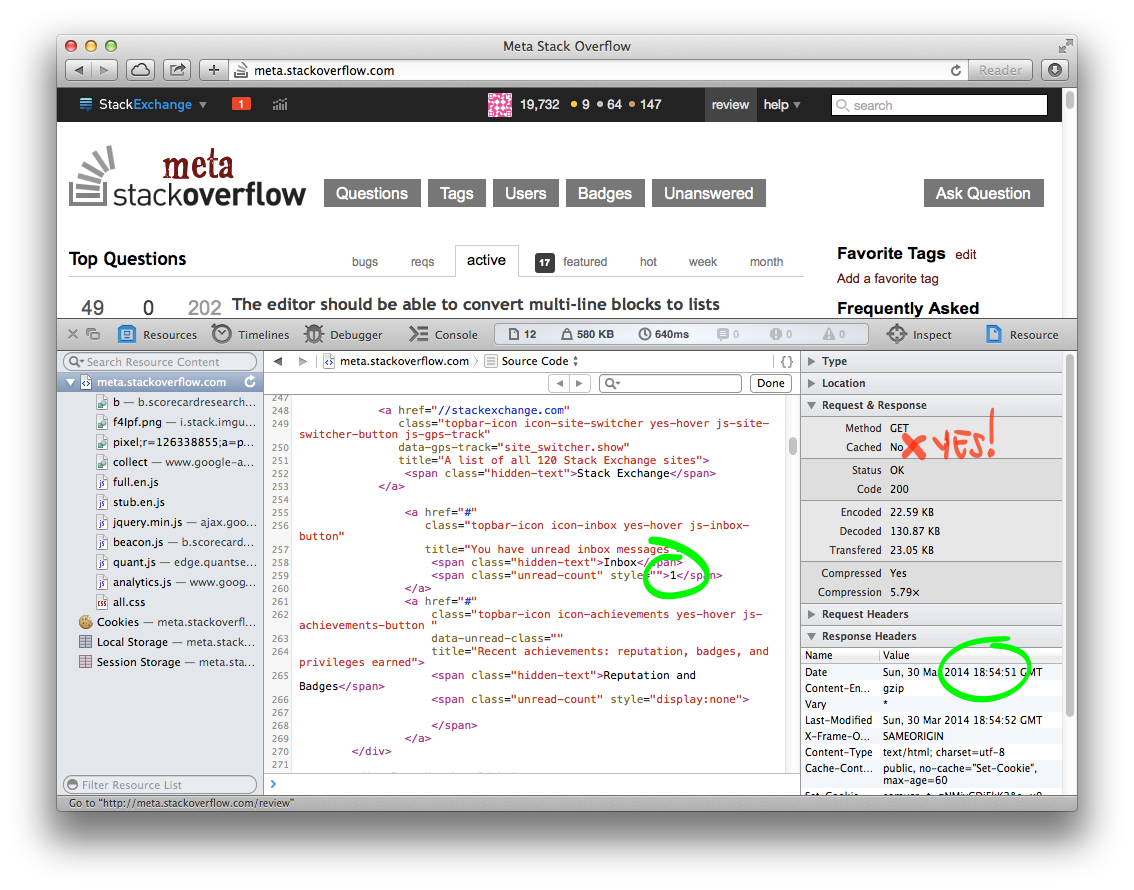 That's not the expected behaviour. When logged in, the server responds with either:

Note the Vary: * header above, for which the specifications say:

When the cache receives a subsequent request whose Request-URI specifies one or more cache entries including a Vary header field, the cache MUST NOT use such a cache entry to construct a response to the new request unless all of the selecting request-headers present in the new request match the corresponding stored request-headers in the original request.
[...]
A Vary header field-value of "*" always fails to match and subsequent requests on that resource can only be properly interpreted by the origin server.

In Safari, within the 60 seconds that the cache is valid, clicking the logo will make Web Inspector show it makes a new request for the page without any restrictions. (Again: Wireshark reveals that no such request is made at all, so that information is false.) Only when waiting a full minute after the last request, clicking the logo will make Safari truly send a new request, with an additional conditional request header:

Chrome and Firefox always make a real request. Chrome then always includes If-Modified-Since, while Firefox never sends that. Even with that header, when logged-in, the Stack Exchange server always seems to return a new page and never returns 304 Not Modified, not even on low-traffic sites such as Meta.

When not logged-in, 304 is used. And one sees that some server-side cache is doing some countdown, where the number 60 counts down to zero:

This first made me think that Safari somehow got some cached server response while logged-in as well, until Wireshark showed me Safari's Web Inspector was showing fake details.

Not the answer you're looking for? Browse other questions tagged bug notifications top-bar safari .

14
Why does the global inbox notify me again of messages I've already viewed in the inbox?
416
Decision on rejected edits should be displayed as a notification to the editor
3
Not getting red (1) when inbox has new message
127
Feedback request: New top bar and MultiCollider redesign
199
The new top bar is out on meta. Consider it a beta
6
Comment inbox notifications show post, but not comment
6
Incorrect tooltip for inbox messages before manual page refresh