I find revisions a really useful way to see full edit history of every post in Stack Exchange.

Can we please have it on the iOS app too? It will also let us see original time of the post submission which is missing, currently showing only last edit time.

The first version of this is available in the beta channel. Tapping on "Edited ... Apr 5 at 23:01" (or equivalent) will take you to a screen like this: 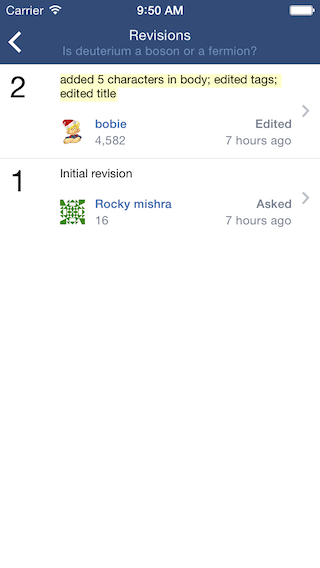 Tapping an individual revision will get you something that looks like this: 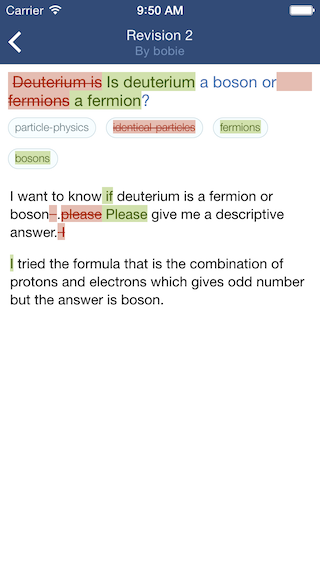 I've still got to polish it up a bit and will probably add a side-by-side view but not markdown (because the API does not yet support it). The comparison is running client side so there may be differences in the highlighted changes for performance reasons.

And in case you're wondering, deuterium's nucleus is a boson, the atom is a fermion, the molecule is a boson, and I apparently should have been paying better attention in PHY 361 because I had no idea that bosons or fermions were composed of other particles.

This is another one of the three reasons I still have for exiting the app to the mobile site, but it's a tricky one to implement. I've made a pretty ambitious first stab at a mockup:

It's a lot of work, and a lot of new pages. Working through this, I can understand why this hasn't been done yet. Hopefully this workflow is a good start for the conversation though, as it's a valuable tool to have.

Not the answer you're looking for? Browse other questions tagged feature-request status-completed ios-app revisions-list .