I wanted to run a Data Explorer query to return a large amount of data so I could export the lot to CSV. Problem is, the page is crashing my machine - the query triggers graphing, and the graphing code can't handle the data!

This screenshot of the insane graph was just barely obtained by another user: 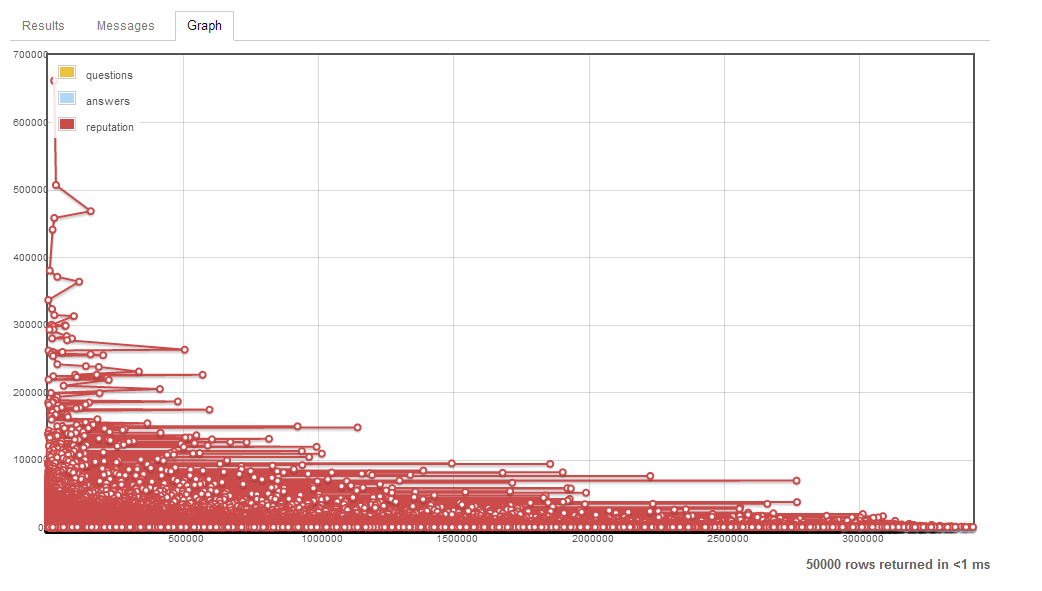 I'm currently unable to modify the SQL as it kills the browser (latest Chrome on a Mac).

Initially I thought it was simply due to the amount of data and perhaps that pagination would help, however the comments (thanks guys!) have uncovered that it was the graphs being drawn.

As part of implementing multiple result sets I'm going through and cleaning up various parts of the query pipeline, and that happened to include a preliminary fix for this issue.

The change defers the rendering of the graph until the first time that the tab is actually shown, which will at least prevent the browser from freezing/crashing right away. I may also introduce a warning in cases where the number of datapoints you have is significantly more than the useful resolution of the graph, so that you know even before clicking the tab that there might be an issue.

Ideally we could detect this during the rendering of the series in the event it was taking a long time, but flot currently only has hooks that execute before each series, which is probably too late for cases like this (we'd have to wait for the first series to finish to know there was an issue, and it likely took a long time for even just one of the three of them to be rendered here).

Not the answer you're looking for? Browse other questions tagged feature-request data-explorer graphs .

3
Data Explorer page keeps freezing Chrome and Firefox
1
What is going on with this Data Explorer graph?
5
Add Support for Multiple Results sets in data Explorer
11
Ability to disable SEDE plot for a query link, before the query is run
4
SEDE using graph with number, string, number [, number …]

313
Database schema documentation for the public data dump and SEDE
78
Let SEDE users get hold of data on unsuccessful close votes for stats
44
Allow cross-site queries in data explorer
59
Delete own query on data explorer
42
When will data.SE get updated data?
3
Which graphing library does Stack Exchange use?
114
Beta sites should be in the Data Explorer
37
Please add UserType to Stack Exchange Data Explorer