Should we add more badges for asking questions?

This proposal was superseded asking days badges, which improves on the core concept.

Early on, there was a question about whether Stack Overflow should add badges for asking lots of questions. At the time, one answer was:

Getting answers is reward enough for asking questions.

Even then, Stack Overflow was getting more than enough questions, so it didn't make much sense to incentivize more questions.

This accepted Meta answer lists the badges that can be earned by asking quality questions. (There are at least 8). But looking at the list of recent Great Questions, it looks more like a list of old and popular questions. These badges are difficult to come by in the first place, and they're much harder to earn on sites like History even though there are some high-quality questions on that site.

It turns out that there's a higher barrier to ask a question on sites other than Stack Overflow. We optimize for pearls, but we still need plenty of oysters. The Student bronze badge is awarded for the first upvoted1 question. There are no equivalent gold or silver badges. Therefore, I'd like to propose the following:

Do you have any suggestions of better names/levels?

To give you an idea of how many of these badges would be awarded, I wrote a query. The results2 for the original trilogy:

The gold version on SO would be slightly more rare than Unsung Heroes and more common than Great Questions. Obviously, there would be fewer badges for smaller sites:

Several older sites would get none at all:

These smaller sites get at most 5 questions a day. I suspect that a gold or silver badge would encourage site regulars to increase that number without sacrificing quality. Certainly the requirement for those questions to stay in positive territory would prevent a person from flooding the site3 with terrible questions in order to get the badge.

1. The original spec didn't consider voting at all for Student and Teacher.

2. Your results will vary from mine since I'm looking at slightly newer data. The bronze badge count also differs from the number of Student badges because the badge isn't revoked when a user's question is later downvoted or deleted.

3. There is a potential problem with cookie-cutter or variation-on-a-theme questions. However, I think the typical tools for closing and deleting questions will prevent people from gaming the system for these badges.

Badges are for demonstrating participation in the community. That means answering questions, commenting, voting, flagging. Asking is part of that, yes, but...

Finding that you have a problem that needs solving is not a choice you make. You should not be rewarded for it inherently. Sure, having the courage and humility to ask a decent question is the sign of a good "scientist", but...

In principle, I agree with what you're trying to get at. But, frankly, upvotes have been shown to be a poor indicator of what constitutes a "good" question: more often, they are simply a sign of popularity through simplicity or Skeet tweets… or, worse, a tag that traditionally attracts the LCDs.

In practice, all this would do is encourage people to ask yet more stupid, worthless questions and we have quite enough of that as it is.

Update: I would probably support this proposal if the barrier to entry were, say, a score of 3. Not 1 though.

Maybe, perhaps with the addition of negative badges, eg:

'Linked list': Can't be bothered to do ANY debugging.

'Notwork': Any network code with str*() calls in it.

'Troll': 'Member for today' plus downvotes.

'Chutzpah': Wanting a precis because, if you idiots recycle freely-avilable info into a different form, it might not be caught by my Uni anti-plagiarism scripts.

I've read through the answers so far and the common thread is that asking a lot of questions isn't desirable behaviour and that Score > 0 is not a sufficient condition to prevent abuse. These are fair criticisms and I honestly never thought about the second. Giving a gold badge for spamming the site with 50 questions that are crap, but manage +1 despite being "meh" is obviously a bad idea.1

It turns out that if we eliminate the score requirement altogether, there would be 18,762 gold badges on SO. Simply by requiring each question to have a positive score, we cut the pool by 38%:

Notice that increasing the barrier to entry only decreases the number of people who get in by about half.2 I could see arguing that the majority of the people who ask 50 or more questions are help vampires3, but the argument gets strained as you crank up the score requirement. Far and away the most common question score is 0; it's hard enough to get a question upvoted even once.

I believe the number of people asking 50+ questions with a score of X drops off so slowly is because asking well is a skill and question score approximately values that skill. Average question score increases as more questions are asked: 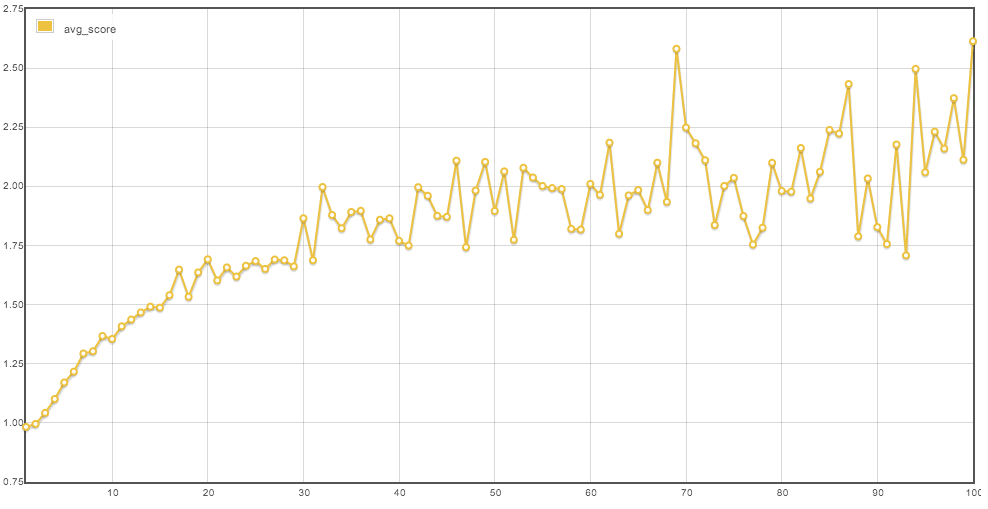 The data gets increasingly noisy as you extend the graph past 100 asked questions because so few people ask that many. It's worth noting that everyone who would earn one of these gold or silver badges has an average question score > 0 even when including closed and deleted questions.

Quite a few suggestions amount to roadblocks in front of badge hunters. I understand the concern, but that seems the wrong tactic here. If you can't prevent gaming the system, it's better to give rewards as quickly as possible. To me teaching people how to ask positively-scored questions is a win. But if not, the best thing to do is to give them their shiny object so they will turn their attention elsewhere. If it injures our sense of fairness, so be it.

A more intractable issue is whether questions are upvoted because they are "useful and clear" or for some other reason. However, the evidence shows that question downvoting increased consistently since the cost was removed: 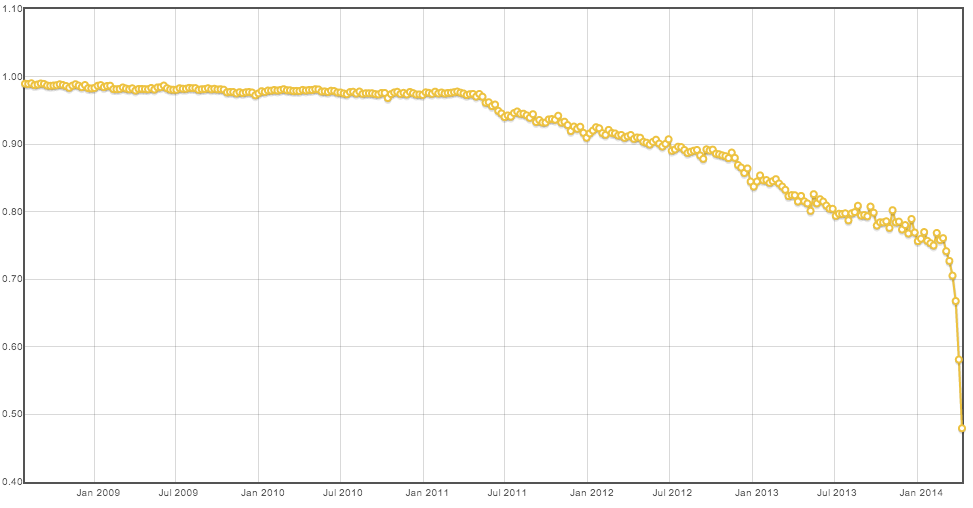 The recent sharp downturn likely is the result of questions destined to be deleted and removed from the dataset in the weeks ahead. I've heard a lot of criticisms of Stack Overflow, but being too easy on questions isn't one of them.

1. This is true even on sites not named "Stack Overflow" since we'd like to see more sites approach our flagship's popularity. If a badge goes from being a net positive to a net negative as a site grows, we should find ways to fix the problem. (It's worth noting that these badges, like Student, ought to be awarded one time per user. I assume this was factored into the objections, but I might as well make it clear.)

2. Actually, the decrease per level is often far less than halving. I find the table utterly surprising. Look at that last number: there are 67 people who currently have 50 or more questions scores of at least +10. There's no particular incentive for doing this: some people are just good at (and presumably enjoy) asking questions.

3. I suspect that rather few true help vampires are able to get anywhere close to 50 questions, however.

Numbers are adjustable, of course. Adding score as a metric ensures that questions will (well, hopefully) be of at least marginal quality, and the goal is to encourage the repeat asking of decent questions. A quick and dirty poking around in SEDE indicates that SO would yield about 5000 gold badges with these adjustments. Sorry, no robust stats, as using it on mobile is a real pain and I'm lazy.

I also think we should add corresponding badges for answers, since we've got the teacher badge already, and should maintain question/answer badge parity.

We optimize for pearls, but you still need plenty of oysters.

A quick note about optimizing for pearls...

Almost any shelled mollusk can, by natural processes, produce some kind of "pearl" when an irritating microscopic object becomes trapped within the mollusk's mantle folds, but the great majority of these "pearls" are not valued as gemstones. Nacreous pearls, the best-known and most commercially significant pearls, are primarily produced by two groups of molluscan bivalves or clams. A nacreous pearl is made from layers of nacre, by the same living process as is used in the secretion of the mother of pearl which lines the shell.

So... While almost any shelled mollusk can produce some kind of pearl, it is really only certain kinds of shelled mollusks, those lined with mother of pearl, that produce pearls that are actually valuable.

Lets think about ways to cultivate questions lined with the kind of quality that will hopefully generate real valuable answers rather than trying to simply cultivate more questions.

This seems to make sense only for certain sites. Namely, beta sites that are struggling.

But since badges get rolled out network-wide, a badge for flooding, say, Stack Overflow, might add more problems than it solves.

There's an intrinsic value to organic questions being the focus rather than inventing questions for the sake of a badge.

Perhaps to encourage deep thought before posting a question for the sake of a badge, the silver and gold badges would need to require significantly more votes: maybe 10 and 40 votes? Furthermore I think average question score needs a threshold as well.

I don't agree with the status-declined decision on this question.

Every big site complains about not having enough good questions:

And here's the one that inspired me to write this answer:

We should have badges that inspire our very excellent community to increase the signal of our signal-to-noise ratio.

But I think that the badges listed by Jon Ericson in the original post aren't good enough. A score of 1 or more is not enough. These badges should be tied to one of:

Negative badges: No. I think there are enough votedown, close question,.. This is not good idea to look at the negative points.

Even though there are many people and developers are afraid of asking a question. You are not doing crime if you don't have knowledge of some thing. There are lots of language barrier as well which community recognized Editing and Editing badges so it will help the community and make useful questions for others.

There are many people that are getting job from their reputation of StackOverFlow. There are many students and fresh developers that might not be as strong as elder developers and this negative points will effect on his/her reputation. It cause people to leave the community. I know already 3 people that left the community. They just look at the answers but they don't never answer any more.

Not the answer you're looking for? Browse other questions tagged feature-request status-declined questions badge-request .

-16
Badge for questions asked for a week
888
Why aren't people voting for questions?
245
Can we prevent some of the low-quality questions from entering our system?
266
The Help Vampire problem
171
Asking days badges
6
50 question per month limit?
79
Misleading description of new Curious badge
26
(How) Can SE sites change their reputation payout?
-3
Could a significant reputation requirement for asking questions be ethical and/or practical here?
2
Badge for asking questions
See more linked questions

691
How do I get attention for one of my own questions without a good answer?
888
Why aren't people voting for questions?
1426
Fastest Gun in the West Problem
561
Exit strategies for “chameleon questions”
187
The generalist badge should be gold
156
Add badges to Markdown?
183
Gold Sportsmanship badge
1174
Don't throw away all votes when a user is deleted
171
Asking days badges