What is the meaning of comments.score?

I don't understand here Database schema documentation for the public data dump and SEDE the meaning of comments.score. Because I don't see any comment that has a score. So this means it is trivial field?

It is the number of upvotes (if any) that the comment got. Most comments don't get any, so you'd see nothing in that field for them.

In this screenshot I indicated what Comments.Score is:

And you can verify with this query that the results match.

There are a lot of comments and there are also a heck of a lot of comments with no score. I've created this query with three result sets, one which produces a graph, because a picture says more than a thousands words. It shows on the x-axis the score and on the y-xis the Log10 of the count for that score, as well as the length and # days in the same scale. 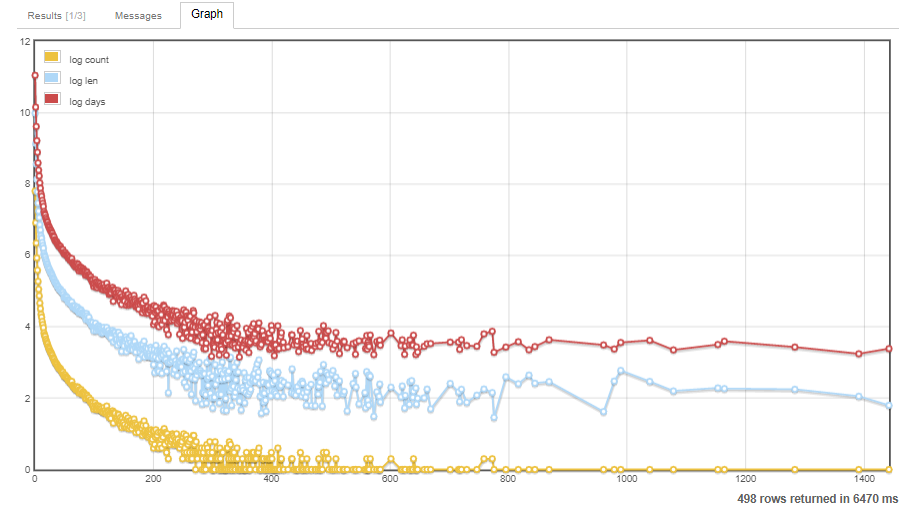 That's true. serialize() can be pretty useful for that as well. I think the trick to coming up with a viable system is finding some way to index the data nodes without killing yourself with complexity.

(all on Stack Overflow)

Keep in mind SEDE is updated once a week on Sunday.
Use the neat SEDE Tutorial written by the awesome Monica Cellio.
Say "Hi" in SEDE chat.

366
Database schema documentation for the public data dump and SEDE

366
Database schema documentation for the public data dump and SEDE
723
How do I get attention for one of my own questions without a good answer?
424
What is a 'rollback'?
799
Recent feature changes to Stack Exchange
831
What are the badges I can earn on each site, and what are the exact criteria for earning each badge?
572
What is serial voting and how does it affect me?
452
A site (or scraper) is copying content from Stack Exchange. What should I do?
6
What is the meaning of postlinks table?
992
Firing Community Managers: Stack Exchange is not interested in cooperating with the community, is it?