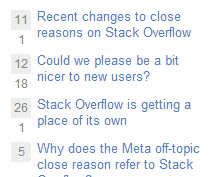 I suggest taking some advice from the user-profile tags page in terms of how large numbers are handled: 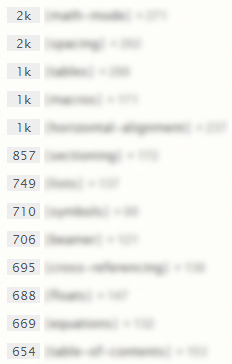 It allows for 3 characters easily, with abbreviations for 1000+ (k for 1,000+, m for 1,000,000+, ...). Some consideration is required for (large) negative scores though. While colouring (say red) is an option, it may be confusion/not immediately apparent to users.

The line wrapping problem is easily fixed just by forbidding it in CSS:

(Yes, the class name for those vote counts is answer-votes, even though the links are to questions, not answers. Go figure.)

As it turns out, the meta.SE style sheet already has rules for increasing the box width and reducing the font size for three- and four-digit scores. However, they do nothing (in the sidebar, anyway), because they're overridden by other rules tagged as !important.

Just adding the !important attribute to those rules helps a bit, but doesn't really look as good as it should, presumably because those rules are really remnants of whatever earlier style sheet the meta.SE style was based on. Based on some testing, though, the following rules look pretty good:

With the extra styles above, the linked questions side bar for this question looks like this: 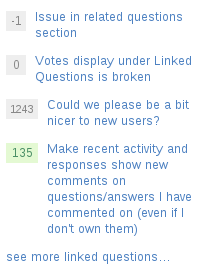 I'll be adding the CSS fixes above to the next version of SOUP, assuming that these styles don't get fixed before it's released. Those feeling adventurous can go grab the development pre-release version, which already includes this fix, from the GitHub repo here.

Ps. The existing .answer-votes.large and .answer-votes.extra-large styles do have an effect on the user profile answers tab, where these classes are also used. Alas, it's not really a good effect — they just mess up the vertical padding for no good reason. To fix this, the SOUP development version also includes the following extra rule:

Really, the best solution would be to throw out the current broken .large and .extra-large styles entirely, and rewrite them from scratch to look something like the styles above.

7
Vote counts >= 100 for linked questions do not wrap properly
5
Too many upvotes cause the sidebar vote counter split into two lines
2
Three-digit post scores displaying wrong in sidebar
0
Votes display under Linked Questions is broken
1
Related question vote count number breaks if >99
1
Related questions' scores break at 3 digits
1849
Could we please be a bit nicer to new users?
149
Make recent activity and responses show new comments on questions/answers I have commented on (even if I don't own them)
-154
Don't close questions where the user has requested that it not be closed
11
Small overlapping text on Related questions in MSE
See more linked questions

1228
Encouraging people to explain downvotes
995
Show all of my question/answers to me even if they are deleted
314
Enable automatic deletion of old, unanswered, zero-score questions after a year?
345
Jon Skeet now #2 in Reputation Leagues!
305
The future of meta.stackoverflow and meta.stackexchange
511
Implement ```-style (fenced) Markdown code blocks
549
How to avoid "Hot Network Questions" on the sidebar
720
Dear Stack Exchange: a statement and a letter from your moderators
583
We're switching to CommonMark