Haalp! Really long question titles are a bit borked! You can (no longer) see the bug in action right here

I just noticed that when a question's title is long enough that it would normally wrap around, it does so a tad late. If the title has a word in the right place, it gets cut off by the background(?!?) of the page. 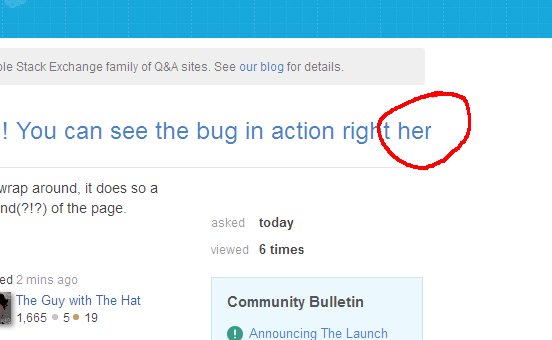 Looks like someone messed up on the padding for the #question-header rule. It is currently set to padding: 20px, which puts 20px of padding on all four sides. Anyone who knows CSS also knows that by default the padding is not included in the width of the box, so the actual width of the box ends up being 40px wider than the page itself, causing 40px of space to the right side (20px of which would always be empty, or the right padding) that will always be cut off if text is present in that area, due to display properties on the ancestor elements.

I'm not exactly sure why they need padding on the left and right sides, and it looks rather silly with that padding there. It seems like that's where the actual mistake is. I think it's supposed to be padding: 20px 0 which would add padding to the top and bottom, but not the sides.

6
Some question titles get cut off by the right margin here on Meta
3
Word wrap bug in question titles on new meta.SE theme
80
Answers deleted via Recommend Deletion votes in review should not be undeletable by the answerer
48
On sites with new responsive theme, word wrap on long titles breaks in the middle of a word

555
How about a "Vote not to close" option to counter the "Vote to close"?
193
Provide a tool for moderators to migrate comments to chat
385
Send authors an inbox message if their question is closed
420
Decision on rejected edits should be displayed as a notification to the editor
186
Every "close" has its thorn: replace "close" with "on hold" for the first five days
364
New three-tiered badge idea: Explainer →Refiner → Illuminator
720
Dear Stack Exchange: a statement and a letter from your moderators
583
We're switching to CommonMark