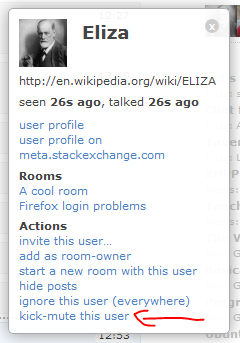 I've been thinking about this for a while... It'd be a really nice way to allow room owners to actually moderate their room without the sort of tricks you refer to (I'd include mass-migration of posts to "bin" rooms in this list as well - fine for cleaning up abuse, terrible if it has to happen as a matter of course for everyday interactions).

This would then accomplish three things:

While discussing this internally, RobertC made the point that we currently do very little within the system to encourage users who've lost their cool to actually take a break-even suspension has no guidance associated with it, and users who can't chat can still read the conversation that first raised their ire - even as it continues without them. If feasible, we may wish to consider...

Naturally, they'd still be able to read the transcripts, however, this may remove some of the temptations for angry users to sit, stoking their anger, until the system allows them to release it upon the hapless villagers.

17
Remove the kicking command, or improve it
154
A guide to moderating chat
163
Flags in chat are defective by design
52
Prevent low-rep (readonly) chat users from showing up in user lists
31
Please can room owners and moderators be given more tools to help prevent spam from suspended users?
21
Bringing chat moderation to a stable state
18
You cannot kick suspended users
13
Moderation controls for Public Chat Rooms

72
How do you delete a room on chat?
93
Disable chat migration notification if one of the users has insufficient rep?
167
Invite low rep users to participate in chat
83
Alert only people that have been in the room recently for chat events
136
Streamline moderators contacting users through chat
4
Permanently kicked myself out of chat room by changing chat parent user
54
Markdown in chat "room description"
38
Chat room stars, personal vs. room
58
Notify room owners when a user is kicked