I'm seeing stars! (I can see who starred a message and so can you)

So I was making a chatbot in Ruby for SE chat, and I discovered that I could find out the starrer of a message. 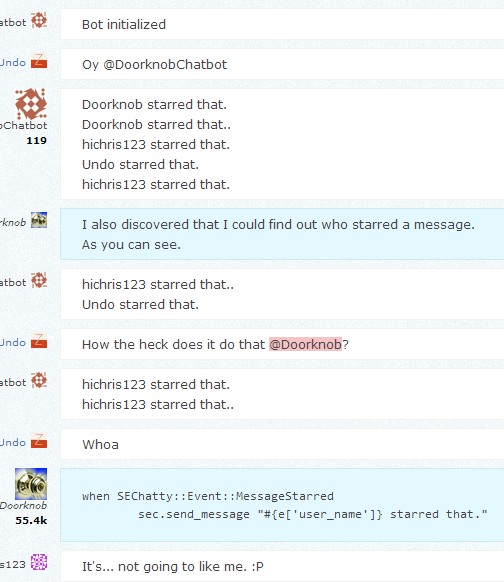 I'm pretty sure stars, like votes, are supposed to be anonymous. Although this knowledge would help for cases of star trolls like this.

Here's the specific slice of code that does this:

I'm pretty sure that the user_name attribute of the JSON is supposed to be the user whose message was starred, not the starrer.

Is this supposed to be happening? If not, should and will it be fixed?

I have always considered stars to not be secret (they aren't secret on the Q&A sites either, where they're called "favorite"). I can see how some people make that assumption though, since we don't really show "who starred this" in a dedicated UI, mostly because, well, we never created such a thing.

It seems that there's disagreement about the expected secrecy (or lack thereof) of stars, so I'm open to opinions.

Update: For now, I've added "message starred" to the list of event types for which we don't send the user id to the client. This is not an issue, since that information is not currently used (at least by the official client).

Going forward, the question is:

Not the answer you're looking for? Browse other questions tagged support bug status-completed chat chat-stars .

69
Provide a way to determine which user is spamming stars in chat
49
Prevent repeated starring and unstarring of messages
53
Sensitive flagger data is exposed via chat WebSockets (and possibly /events), allowing "private" flags to be publicly visible
4
How can I see chat messages starred by others?
4
Is it possible to filter the star list in a room for a specific user?