Can we please have a sensible date style on the blog?

Perhaps you haven’t noticed this, but there are only 12 months in a year, not 24.

The date style used on the sites themselves (Sep 13) seems to suit everyone, so why not go with that? Personally, I’d prefer the date before the month name, rather than after, as this better suits the way I speak dates: I say the third of October or the twenty-fourth of the fourth, not March fifth. However, the way dates are written here is, at least, not confusing.

The problem with dates is that they have written representations, and they are also spoken, but the two aren’t necessarily intertwined. In other words, when saying a date aloud, I don’t generally read it, I simply say it.

Recently the blog was redesigned, and the date format is now similar to the one used right there (or on any SE sites). 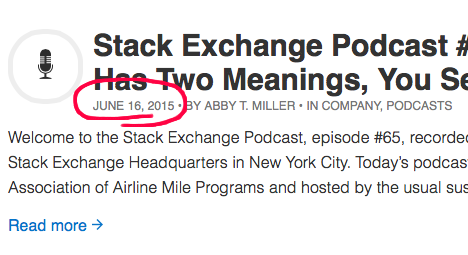 So currently it seems that the date is quite clear.

I'm a big fan of d-mmm-yyyy, so that one would be 24-Apr-2014. Unambiguous in English, regardless of the local customs. Would need to adjust the mmm bit for other language sites.

Not the answer you're looking for? Browse other questions tagged feature-request blog date-format .

826
Can we have the ability to retract a close vote before it closes?
792
Allow an edit to notify downvoters: “I think I've fixed the issue now - please check”
224
Why doesn't the Stack Overflow team fix the Firesheep style cookie theft?
74
Make the New blog message disappear after reading it
189
Using the Stack engine for the blog – a long-term idea for maintaining a healthy blogging culture
114
Can we have click-to-close back, please?
114
Remove misleading statements from the blog and the tour pages
31
Please change the blog to show posts by date
117
Who is the intended audience for the Stack Overflow blog?