Wow, that took longer than expected (though right around the 6-8 week mark), but we finally have a semi-working prototype of the new profile page.

There’s a longer explanation on part 1 but the gist of it is this: we’re splitting the profile into two pages:

This part is just focused on the new “About Me” page.

The prototype is only working on Stack Overflow so far, but you can try just about any profile by going to https://stackoverflow.com/users/reloaded/{id} (note: SO-only for now, must be logged in). Here are some handy examples:

EDIT: The historical reloaded page is no longer visible, but it looked something like this: 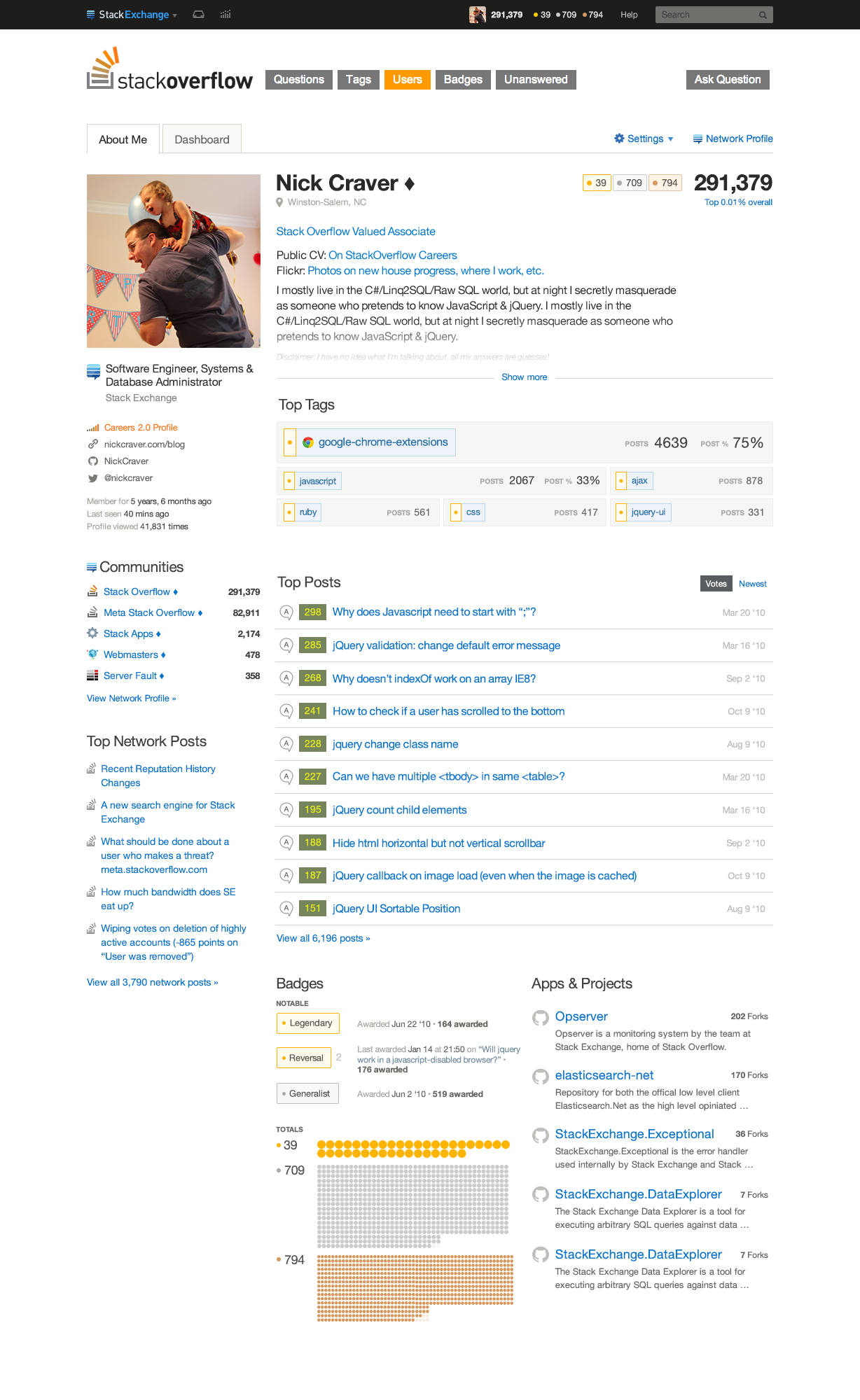 We made lots of little changes based on your feedback, but the two biggest changes are the Tags and Badges sections.

The tags section now gives a very basic visualization of where a user does most of their posting. The section shows between 6 and 9 tags for each user, and the size is based on the percentage of posts a user has in that tag. It's easiest to just look at some examples here:

The exact rules for how the sizing is done are still in flux, so if you notice a profile that seems off, just let us know and we'll see if we can tweak the rules.

After the last proposal was met with at worst confusion and at best a lot of "meh", we went back to the drawing board on the badges section. We were deeply inspired by this image: 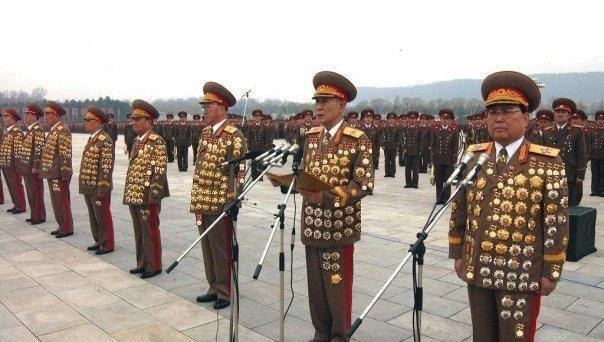 We decided we wanted to focus on two things:

So here's the result: - Gheorghe Bulicanu - a newish user - Nerdess - a 1k user - SLaks - a top user The "Notable" section at the top lists your rarest badges, based on the number awarded on that site. The "Totals" section visualizes how many you have, and scales with your badge count. It also shows gold, silver, and bronze as different sizes to emphasize those rarer badges.

We've made lots of other changes, but just a few I'll call out:

Other notes that were common questions / requests:

We know there are still bugs, so we’re looking more for big-picture feedback than minor bug reports. We’re still actively building the page, but wanted to get the early prototype out for feedback sooner rather than later. Let us know what you think!

BEWARE: too many changes to a good and well established interface usually lead to a WORSE interface!!! (see Micro...t's disasters, GMail changes or the recent Firefox 29 UI) !!! 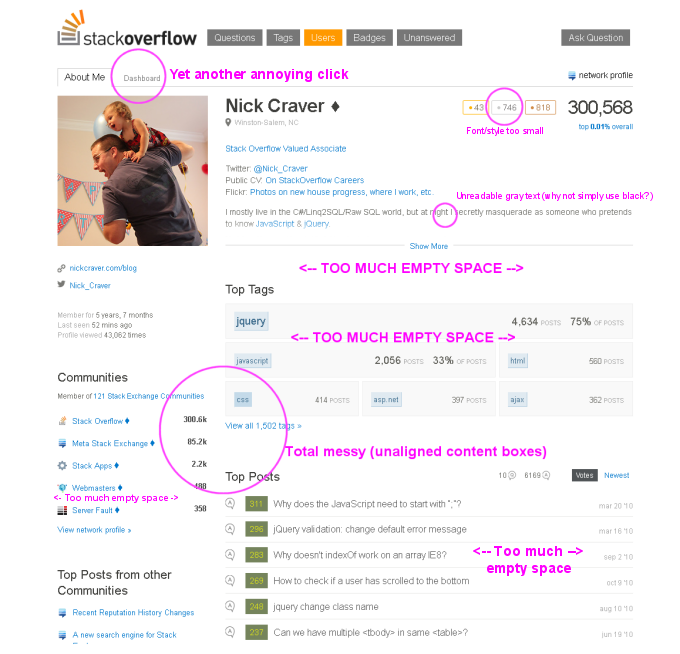 I don't know if Microsoft have a got a patent on this, but couldn't you just use coloured bars for the tags? Far more compact, and legible. Currently, unless someone has one or two predominant tags, it's not even immediately obvious how/that/why the sizes are different.

Oh, and I second badp's request that careers not be auto-linked (I'm having serious second thoughts about the 'connectedness' of my 'online persona' right now...)

For those who want to easily get to the new user page from an old one, use this userscript I made. It makes the user's avatar link to the new page. 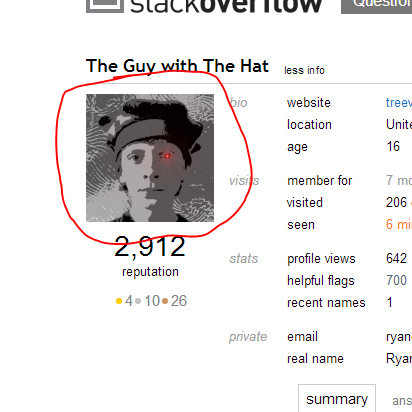 While I appreciate the consistency in styling the tags as they are styled elsewhere on Stack Overflow, the styling does look somewhat out of place.

I'd suggest changing this to something more suitable for such a 'modern' profile page. Perhaps something as simple as this: (I removed the 'post-tag' class, added the 'tag-style-legend' class and increased the font-size to 1em.)

While this may break some consistency within a Stack Exchange site, I do feel it looks a lot better.

The main thing I use the existing "dashboard" for is to check for recent activity on my posts. As such I would require an "Activity" ordering for the Posts table for it to be useful to me.

The new Top Tags section however made me wince a bit. Maybe because the tags I have on my profile have short names, but there is just too much space and not enough connective tissue holding the pieces together. Maybe a stronger border, or a more prominent background color would help better tie the right margin info together with the tag itself?

I am not offending, I appreciate your work. Just remember one thing. When you successfully complete this and gift it to us, give us an option to revert to the old look.

This option is for the viewer, not the owner... It is to comfort the user who is seeing the other user's profile. So, if I click on it, then then on, every profile I see on SO, including mine, will display that way. Any other user seeing my profile would still see it their way...

This can be maintained for a specific time period only. Say 6 months or so. Until then, the newer version can be put in beta...

Not the answer you're looking for? Browse other questions tagged discussion profile-page feedback .

130
Profile Page Makeover, Part 3: the Prototype returns
116
The profile page is getting a makeover (Part One)
113
New users can't create new tags: show a singular or plural message?
100
Tag scores are not updated and the issue is getting worse
9
An official way of closing announcements on Meta?
-2
Filler for empty “About Me”
5
Can we add accordions to the bio?