When I click the "hamburger menu" in the right part of the top bar:

I usually get the site switcher drop-down:

But sometimes, I'm taken to https://stackexchange.com/ instead: 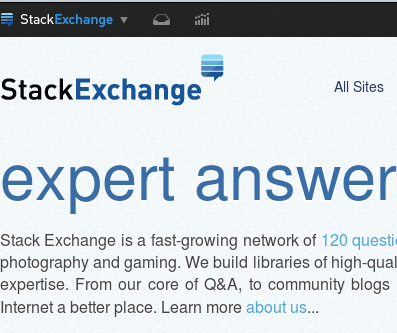 But it doesn't always seem to happen. When I started writing this question I had no trouble getting it to occur, five minutes later I couldn't reproduce it, and ten minutes later I could again. At the moment my guess is that it's related to how quickly some page element loads.

Being unable to predict the results of clicking the top-bar is somewhat confusing, although it does work most of the time, so it's not terribly frustrating.

It took me a while to figure out that it wasn't my own fault—at first I thought that the "StackExchange" text linked to SE and the down arrow showed the drop down, and that the inconsistency was a result of my inaccurate clicks. Doing some experimentation, it seems that this is not the case, and the entire rectangle (circled above in red) has the same behavior.

I've observed this behavior in SeaMonkey 2.26 and Firefox 28, and Nick Stauner has reproduced the problem in Chrome 34 (see comment below).

The ideal behavior of the top bar buttons should satisfy the following goals:

The current implementation, which defines the buttons as normal links in the HTML, and then later adds a jQuery event handler to catch normal mouse clicks and toggle the menu, meets all these goals except #2.* The reason it doesn't meet that goal is because it takes as while for jQuery and the SE framework to load, and until then, the buttons act like normal links.

There are several ways in which this could be fixed without compromising the other goals:

The next version of the SOUP user script will include a client-side implementation of the last option above (assuming that this bug isn't fixed before its release). Adventurous users can grab the pre-release development version from the GitHub repo here. For the merely curious, here's what the code looks like:

(The event handler is set on the root document object, because at the time the user script runs, there's no guarantee that any other part of the DOM is present yet. In a proper SE-side fix, the handler could be installed on a closer parent element of the buttons.)

* Well, in Firefox it does, at least. In Chrome, middle-clicking seems to also toggle the menu, which is probably a bug, or at least a misfeature (being neither expected nor useful behavior, for users used to middle-clicks opening a new tab). It does seem to be a different bug from this one, though. Also, currently only the site switcher menu actually has a useful middle-click / no-JS behavior; the others just have href="#".

127
Feedback request: New top bar and MultiCollider redesign
145
Is anyone else personally terrified of the new bar at the top?
17
StackExchange drop down hiding chat, blog and log out, concerns
12
Chat notifications are broken for the new top bar
8
Drop-down menus in new top bar react inconsistently to click / hover events
3
Why is the link to "help" present in the site switcher and also as a separate option?
29
Top Bar icons are misbehaving - dropdowns aren't functioning, instead linking to Stack Exchange
13
Can I please have the option to sticky my top bar wherever I want?