How to remove a wrong synonym?

By mistake I'd created stackoverflow as a synonym for iPhone, actually its wrong, now my question is how can I remove that synonym? 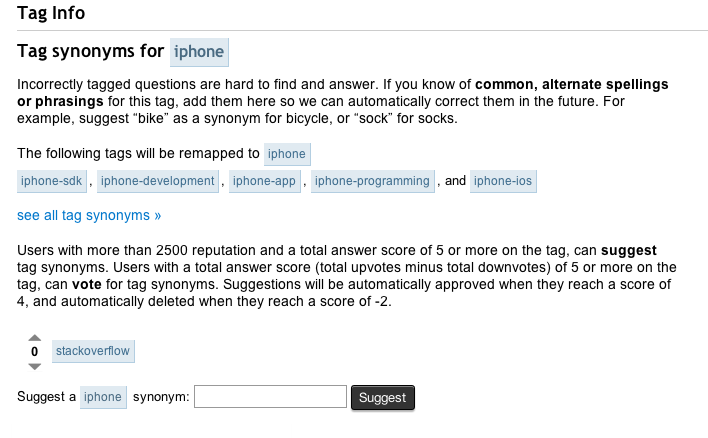 support tag-synonyms
Share
Improve this question
edited May 23 '17 at 12:35

For that, they can upvote or down vote on suggested synonyms. If a synonym will get 4 upvotes then it'll get approved, if it'll score -2 (that's negative) it will get rejected, and will delete from the list.

Not the answer you're looking for? Browse other questions tagged support tag-synonyms .

603
Formatting Sandbox
491
How does deleting work? What can cause a post to be deleted, and what does that actually mean? What are the criteria for deletion?
805
What are the badges I can earn on each site, and what are the exact criteria for earning each badge?
188
Can we allow 7.5K users to suggest tag synonyms without a score of 5 in the tag?
258
A real solution to ambiguous tags
83
Does the tag synonym suggestion system work?
250
The homework tag is now officially deprecated
106
Improving Tag Synonyms
133
Tag synonym dashboard 2.0