Should the post-ban threshold be adjusted on MSE?

as of writing I have one previous question here on meta, which was a feature-request, it hasn't been well received and thus has downvotes (overall -6).

According to the help page:

Voting is different on meta. 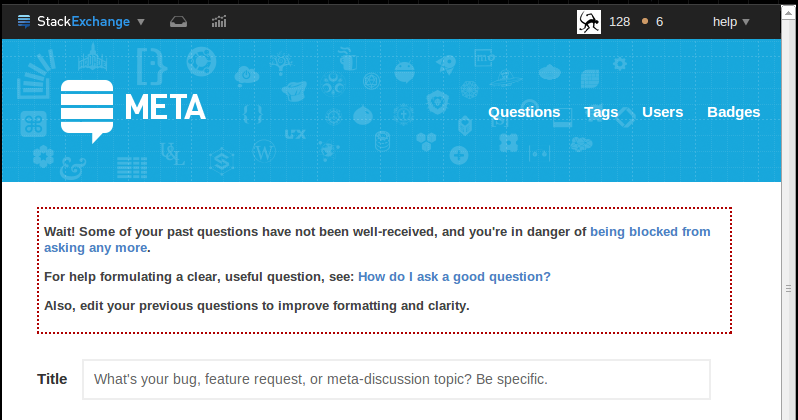 Should the note in what's meta about meta stackexchange be further expanded? Right now it reads:

It gives no warning that you may find yourself in my current scenario (it's perfectly understandable, given that MSE is separate).

Or should the post-ban thresholds be adjusted on this meta site?

The threshold here is significantly higher. The current implementation is only likely to stop:

If you are blocked and you firmly believe that you don't fall into either category, or have fallen into the first and are serious about adjusting the way that you interact with this community, you can contact us and we can have a look. If you've got a whopper of a lead balloon or two holding you back from participating positively, we're generally going to be inclined to help you.

If this becomes a pattern for you, or if we couldn't hope to get you out of a block even with a crane, then this isn't the best place for you to participate - not everyone is well-suited to argue on capital hill, and you shouldn't feel bad about that.

We do not have automatic question blocks enabled on any other meta site.

You should not have seen the warning that you did - you're not in any danger of being blocked. What happened was, the setting for where the prompt kicks in was still at the level that it would be on Stack Overflow, even though the threshold here is much higher. I've adjusted it so that folks will see it only if they're approaching the higher threshold, which is quite difficult to do, but it'll kick in slightly sooner (by way of comparison) since voting here is quite, well, unrestrained :)

Not the answer you're looking for? Browse other questions tagged bug status-completed meta post-ban .

174
Get rid of the question ban on Meta; suspend actively harmful users manually
36
Should the automated ban on questions used on SO apply to Meta as well?
-8
Increase vote limits on meta sites

72
Add a note about downvoting on Meta
20
Please add the “Why are upvotes and downvotes here different?” text to Meta SE site FAQs
36
Voting on Meta is not just for (dis)agreement. Update the help center to reflect this
124
A Proposal for More Constructive Downvoting on Meta: Express Disagreement by Answering the Question
22
Stack Overflow Help Center is wrong about Meta account and reputation
323
Stack Overflow is getting a Meta of its own
75
How should low-reputation MSE users express disagreement with a (proposed) network-wide change?
9
“whats-meta” text doesn't make sense for this site
561
We're switching to CommonMark