Badge symbol in notification is of the site you're on, not where badge was earned

It's so cool that the notification reminds you of the colour of badge you've earned. But I am a little puzzled by the symbols:

I can understand why this ended up this way given per-site theming and not wanting to load the sprite sets for every site when loading any one site, but still this is very counter-intuitive and keeps coming up.

I propose making the badge icons in this particular menu where many site badges sit side by side just be the colored dots with no site-local sprites applied.

After what turned out to be a somewhat excessively long delay, version 1.16 of my Stack Overflow Unofficial Patch (SOUP) user script now includes a client-side CSS patch to fix this.

Basically, what I did was add some custom styles to override the default styling for the badges in the achievements menu:

(The reason for all those ugly !important tags is that some SE sites, like Meta.SE, use !important in their site badge styles, so I have to use it too in order to consistently override the site styles.)

The result looks like this (on Academia.SE, which has a pretty distinct badge style): 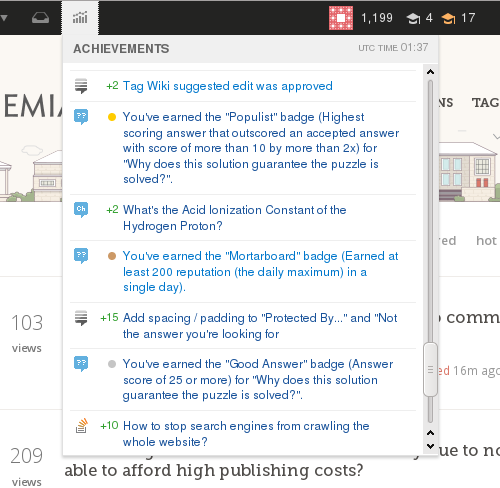 Note that the custom dots are a little bit bigger than the standard ones used e.g. in the top bar here on meta, since I felt the standard dots looked too small in the menu.

8
Badge icons -- is this a bug?
7
Notifications for badges on other Stack Exchange sites use the wrong badge icon
4
The current Stack Exchange's badge image gets displayed on achievements dialog
3
Aviation icon showing for non-aviation change in points
3
badges from sister sites rendered with badge graphic from currently visited site
3
Badges in achievements dropdown should not have custom designs from sites they weren't earned on
2
Top-bar notification drop-down always uses badge icons from current site
2
Badges in achievements dialog appear as if they came from the current site
2
Stack Exchange badge sprites pulled from wrong site
2
Badges from other sites look like reels
See more linked questions

264
"You have gained power. Here's how to use it." kind of message
186
Subscribing to questions and comments that don't belong to you
831
What are the badges I can earn on each site, and what are the exact criteria for earning each badge?
420
Decision on rejected edits should be displayed as a notification to the editor
7
Bad notification for the Mortarboard badge
7
Sites where the badge symbol matches or resembles the badge name
364
New three-tiered badge idea: Explainer →Refiner → Illuminator