Just noticed a minor css issue on this question:

Math Stackexchange said "We are Offline" until I reset my router - Why?

The related questions on the right hand side have some overlapping text in Chrome:

(This only applies to this very site, Meta Stack Exchange)

This appears to be fixed now with the new design as of today: 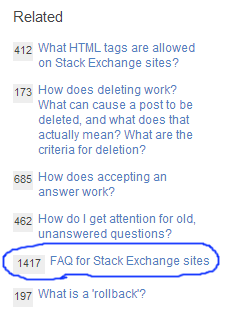 This is a side-effect of the (partial) fix to Related questions with over 99 score display incorrectly, which was resolved by preventing multi-digit question scores from wrapping onto multiple lines. However, now they overflow their boxes horizontally instead: 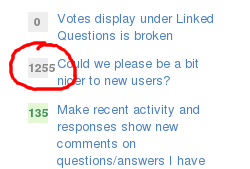 Adding the following extra CSS rules would fix the problem by making the boxes wider for three- and four-digit scores (like they are on SO, for example):

(The !important tags are only there because the existing styles use them. IMO, it would be better to clean up the CSS and get rid of them, as well as the fossil layers of conflicting rules that are their presumed raison d'être.) 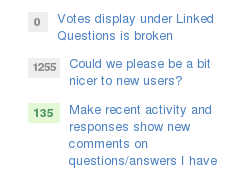 (Ps. The second screenshot above is taken using SOUP, which already includes this CSS fix.)

Not the answer you're looking for? Browse other questions tagged bug status-completed design meta sidebar .

2
Bug in the look of side bar- 4 digit post score is not fitting in the box but 3 digits are fitting correctly
2
"Related" questions breaks layout when votes >999 (when is 4 chars)
1
Number of votes for a related question comes out of block
57
Related questions with over 99 score display incorrectly
3
The Math Stack Exchange site said "We are Offline" until I reset my router - Why?
6
4-Digit rep up Bug in Mobile Device?
2
Related question score text CSS

330
Stack Overflow is getting a Meta of its own
544
How to avoid "Hot Network Questions" on the sidebar
580
We're switching to CommonMark
309
Goodbye, Prettify. Hello highlight.js! Swapping out our Syntax Highlighter
104
Please welcome Glorfindel to the MSE moderation team