Google “answering” my search with link to SE, but not showing the top answer(s)

I googled is html a language.

Like (almost) always, SE was first. However, they actually answered my question in a fancy box! 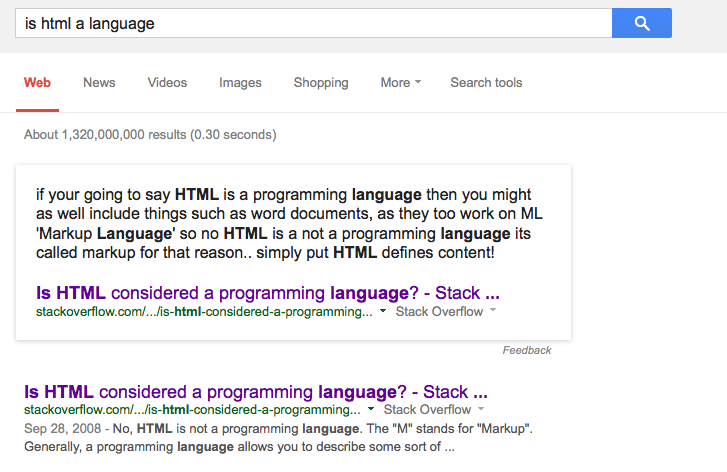 I read it, and clicked the link because I needed to know how many upvotes the answer got. It got 2 upvotes and is near the bottom, since there are many answers to this question. The top (selected) answer has 317, and is also the description being pulled for the second top listing, as shown above.

Here is the question: Is HTML considered a programming language?

I would think this should be fixed, but maybe it is intentional, as the shown answer DOES agree with the top answer, and is short enough to fit properly.

discussion answers google
Share
Improve this question
edited May 23 '17 at 12:35

If there is a problem in the way Google features work, then that's a bug for Google, not Stack Exchange.

The feature is only visible when searching on Google.com (and then only some of the time), and there is a feedback link below it in your screenshot. Perhaps you could use that to report the problem?

When you do (I clicked Not Useful), there is also a Learn More link, which tells us:

Search is constantly evolving. In a typical year, we experiment with tens of thousands of possible changes. Every change is tested in an experiment where some users see the change and others don’t. By getting your feedback on our experiments, we learn which experiments are successful and should become part of Google Search for everyone.

The feature is experimental, and they want your feedback, so give it to them, not us!

Unless you can figure out what metadata Google uses and how Stack Exchange could influence this, there is little point in calling this a bug. As far as I can tell, Google just picks an excerpt from all text on that page that contains the keywords, nothing more.

Update: for me, the box now highlights text from the top-voted answer: 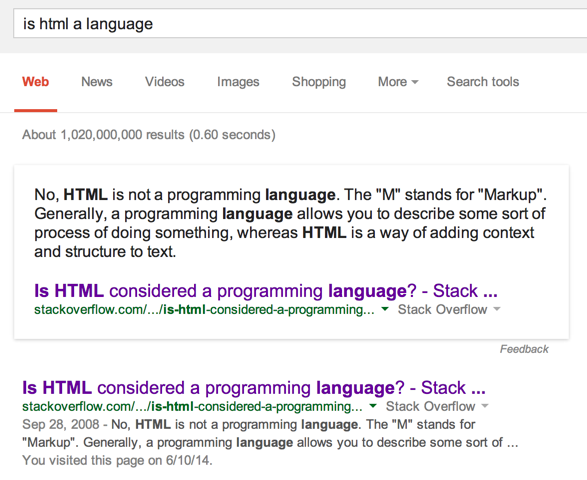 Perhaps the Not Useful clicks had an effect?

We do have influence over this, using a feature the Google bot listens to: HTML5 microdata. It's a set of attributes you can add to HTML5 elements to guide machines in better understanding the content of a page.

I say the Google bot listens to microdata with certainty: Google itself recommends using microdata for interacting with their search engine. They are also one of the collaborators who made the current standard vocabulary for microdata - schema.org - according to their schema.org FAQ.

Schema.org contains a Question schema and an Answer schema (there's also the full schema list if you want to browse). We can take advantage of the acceptedAnswer property to guide Google to provide the right answer in its searches: we'll mark the accepted answer as the one that's, well, accepted, or if none is, the one that has the most votes.

Stack Exchange's development team is already using microdata, as can be seen by examining this question itself:

They currently define questions as Articles, so let's define them as Questions instead. It might look like the below. I'll ignore most of the HTML which Stack Exchange uses, including the votes and stuff, in favour of just getting the idea across.

The following attributes (helpfully syntax-highlighted) are the microdata ones:

Note that in microdata, all properties are optional to define, so we just define as much as is relevant or as much as we want.

An aside about vote counts

We could possibly also provide the vote count for the question and answers, which may mean not having to say an accepted answer is accepted. There's a complication, though: the Question and Answer schemas don't have a simple voteCount or score property. Instead, they have separate upvoteCount and downvoteCount properties.

So we have a couple of options:

Not the answer you're looking for? Browse other questions tagged discussion answers google .

605
Formatting Sandbox
204
What formula should be used to determine “hot” questions?
296
How do we encourage edits to obsolete/out of date answers?
2151
Stack Overflow is doing me ongoing harm; it's time to fix it!
952
Firing Community Managers: Stack Exchange is not interested in cooperating with the community, is it?
193
The Follow Questions and Answers feature is now live across the Network
577
We're switching to CommonMark
727
New Feature: Table Support