Area 51 rep is not displayed in communities list [duplicate] 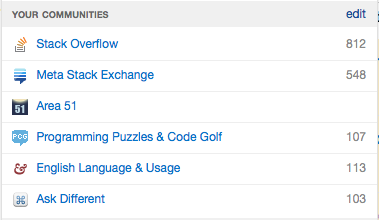 As you see. What can be the reason? I added it to communities list about a week or two ago.

As such, it just doesn't support exporting your reputation for use in that dropdown box.

Once upon a time a new version of Area51 was in the works but the last anyone has heard about that idea was 2 years ago now.

Not the answer you're looking for? Browse other questions tagged bug status-bydesign area51 top-bar communities-list .

199
The new top bar is out on meta. Consider it a beta
6
Removing all "my communities" causing the list to reset
11
Hide (or use) "More stack Exchange Communities" when editing your site-switcher list
15
Why I can't edit "Your Communities" list in stackexchange.com and Area 51?
57
Meta sites in "Your Communities" display different reputation
11
Bottom of badges is cut off in communities list on hover