The review audit pulled a total fail today. As in a "Go home, Review Audit, you're appallingly drunk" fail.

So imagine my surprise when I saw that question in the reopen review queue today. My morning coffee had kicked in, and the up vote count on the question seemed suspicious, so I clicked to open the question in a new tab. I saw that the question was indeed still closed; realized it was an audit; and then I selected the correct action of "Leave Closed."

And I failed the audit. Or more accurately, review audit failed to audit properly. :-) 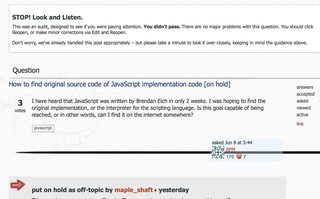 And just in case anyone doubts I clicked the right button in my caffeine deprived coma, I did select "Leave Closed." 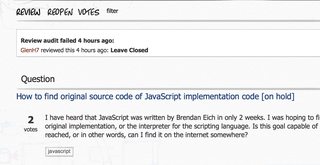 1 The MP.SE question is also heavily down voted due to the initial inflammatory rhetoric the OP used in asking their question. The OP was asked to clean up their language and has since edited / removed the rhetoric.

2 Specifically, 3 community members voted to delete the post and it was removed on June 21st. Beyond reference material for this question, there really wasn't any need to have kept the question around.

Oops! Review Audit did it again. This time, it bit another user in close queue and yet another user in reopen queue. FWIW question used in these audits not only was closed, but also failed to reopen.

Checking the timestamps, the question had been closed a few days prior to the audit. Does this suggest that the review audit is using a cached list of questions? And perhaps the cache needs to be refreshed more often?

115
At smaller sites, penalize hot questions having 3-4 close votes
25
Request for review: close/reopen “known good” audits
33
Failed a Reopen Question audit — sure looks like “Not a real question” to me

339
What are review tests (audits) and how do they work?
10
Reopen Question review audit fail clarification
129
Bring a “human factor” into review audit composition/selection
22
A reopen queue review audit shouldn't show me a question that has an active bounty
384
Add an “I don't understand” option for review audits
102
Clicking “Add comment” fails review audit
30
Review Audit: highly upvoted but closed question
92
Showing comments for a question should not fail a “first answer, known to be good” audit
6
Was this reopen audit question actually a good post?