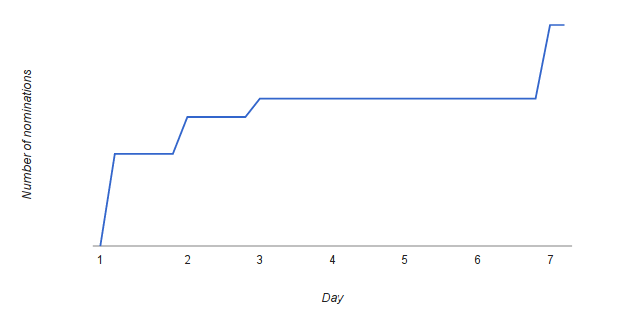 On Unix and Linux, we had no activity for 5 days, and then two more nominations suddenly came in within a couple hours of the deadline. The problem with this is commenting is no longer obviously accessible once nominations end; you have to know to go back to the nomination tab, and be bothered enough to do so.

Personally I think comments should be open and visible the entire election, even during voting. The vote buttons should show up when the election phase starts, but the comments shouldn't disappear. If there's some reason not to do that, I think there should be a window where no nominations are accepted, but the voting hasn't started yet, so that everyone can comment on nominations without people slipping in at the last minute before the phase ends.

5
Should +1 and “I'll vote for you” style comments be allowed in nomination comments?
12
Should the primary phase of the election be eliminated?
41
Make moderator election questionnaire mandatory
12
“Election ends: tomorrow” is too imprecise
59
Improve election schedule with respect to the questionnaire
18
Notify users of question collection prior to moderator elections
52
Moderator Elections functionality: voting UI, commenting and flagging