Normally, if I can I keep the queues clean on the site that I moderate. When I was logged in, all the post counts in /review were at zero. The indicator at the top of the screen had a number greater than zero on it, but I know this phenomenon is not out of the ordinary, as sometimes the indicator takes a few minutes to catch up even with an empty queue.

However, I discovered that the number on the indicator was lingering for another reason: the site had been holding back reviews (as seen from the queue as viewed in a private window). Note that I have not skipped any of these review tasks: 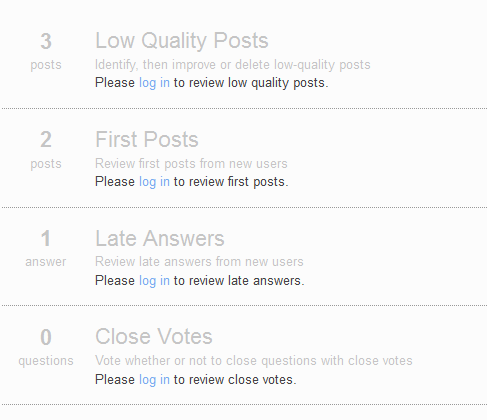 I realize that the number of items on the review indicator at the top of the screen represents everything that is currently in the queue, skipped items included, but I hadn't skipped any, and no posts were lingering there. I know the indicator's count also includes items that I've already voted to close, but since I'm a moderator on the site, that's not the issue here either.

I don't know if this is a bug, or if the system is telling me that "enough is enough" and I've reviewed enough tasks for a while, but as a moderator on the site, I should be able to at least see all of the review items currently in the queue.

I realize that I shouldn't be doing the lion's share of the reviewing, but on a site with moderate traffic, this is something of a necessity to prevent queue stagnation.

As Servy has pointed out in the answer below, it could possibly be due to certain items being locked, but I don't think that we had sufficient users in the queue at the time (based on the statistics) for this to be the case. Since the indicator number lingered for more than a few minutes(justifiably so, with the count reflecting the number of items in the queue), I don't think it's a caching issue either.

To complete my song: "You would [review] too, if it happened to you..."

Certain review items end up being "locked" while a user is reviewing them, to prevent people from stomping over each other while trying to review the same post. If the post in question is still under review after the user has chosen an action, it once again becomes available for you to review.

Not the answer you're looking for? Browse other questions tagged support bug review .

540
The current review system encourages fake reviews; some people upvote everything rather than actually fixing problems
130
Let's get rid of the 10K flag queue
50
How does the review-needed indicator work exactly?
37
Experiment: Review-needed indicator logic for sites that sometimes have empty queues
106
What criteria should we use to determine which review queue indicator a site will have?
121
Visual design changes to the review queues
241
Review queue workflows - Final release