Who borked the Area 51 stats? 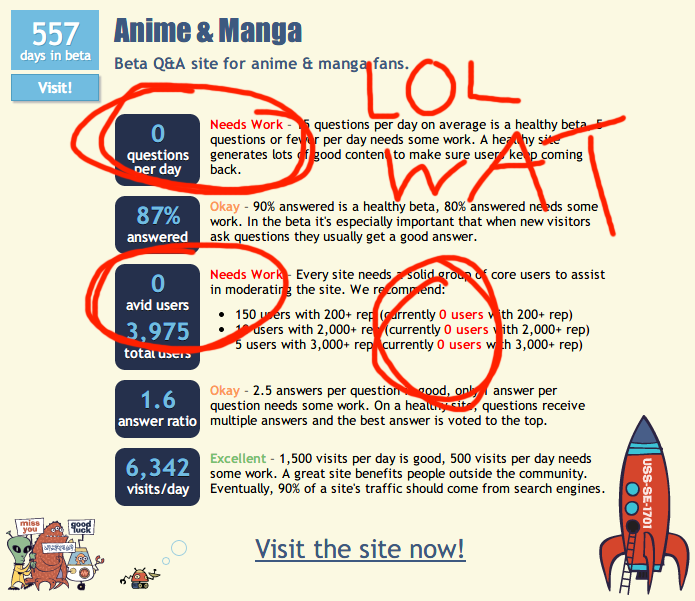 In the Q&A spirit, my question is: Who borked the stats?

A reference change to the underlying libraries didn't expose itself as an issue until the library that relied on it was called. As luck would have it, erroring requests in the multi-page fetcher were also swallowed (not intentionally). Silent fail FTW!

A fix has been deployed and stats should be updating properly now.

Fun fact: I don't have an Area 51 database locally. This fix brought to you by blind luck guesses and pushes to production for testing.

In the meantime, the figures on the site's home page look correct. The Stack Exchange site list also has a correct-looking figure for questions per day.

I wouldn't be sad to see those Area 51 figures go away altogether. If they're going to stay, please at least correct the goals. As it is now, each beta invariably has people who compulsively compare the current figures against the goals and obsess about them, instead of looking at the big picture.

Not the answer you're looking for? Browse other questions tagged bug status-completed area51 .

4
Area51 statistics page for Islam.SE is not showing any avid users

989
Show all of my question/answers to me even if they are deleted
245
Can we prevent some of the low-quality questions from entering our system?
304
The future of meta.stackoverflow and meta.stackexchange
289
Let's stop displaying a user's accept rate
253
Increase close vote weight for gold tag badge holders
22
How exactly are Area 51 beta stats calculated?
162
Writing.SE clamours for graduation
155
After the recent CM departures, are there plans to shut down network sites or Area 51?
580
We're switching to CommonMark