I have the following flag history statistics: 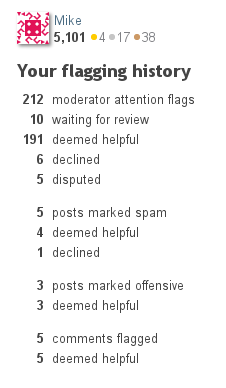 I suggest making each of the entries into links so that the user can easily sort the flags shown. For example, if I wanted to know which of my moderator attention flags were declined, I just click on the respective link and only those entries will be displayed. As it is now, I would have to scroll through 212 flags to try to find the declined ones - something that many users will not do. Allowing users to quickly sort through their flags will give them a better picture of what they are doing wrong (and right) to prevent incorrectly flagging things in the future.

95
What is the difference between disputed and declined flags?
28
All users should see their flag history as soon as they make a flag
191
Allow moderators to reply to a flag
54
Categorized views in past flags (helpful/declined/disputed)
151
Allow recovery from flag hellban
39
Make reviewing declined flags less painful
69
Explicitly mention who decided the fate of a flag
294
Add optional box for spam flags letting you say why you think it's spam
403
Can a machine be taught to flag spam automatically?