I've noticed over the past week or two (or three?) that Stack Exchange URLs in posts don't have their anchor text automatically converted to the title of the linked post during the edit and preview page anymore. For example, this,

isn't automatically converted into this, 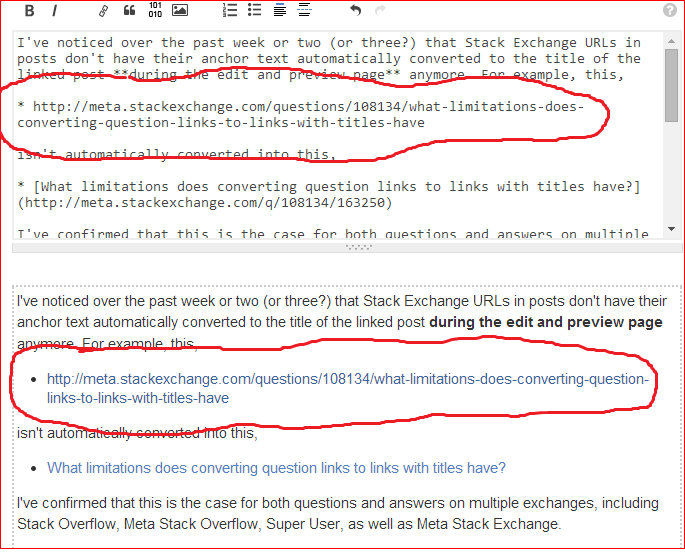 However, on post submission, the anchor text seems to still be converted automatically.

Shadow Wizard also confirms that I'm not (that) crazy,

@Cupcake you're right, you found a bug, links are not parsed anymore as they used to.

Is this a feature or a bug?

I thought maybe that, instead of being a bug, a new change might have been intentionally deployed recently to remove the automatic conversion, perhaps for performance reasons. However, searching recent MSE posts doesn't turn up anything about such a change, as far as I can tell.

Fixed in the next build. We recently* tightened up restrictions on the API's JSONP callback parameter (mostly in response to this). Unfortunately we broke ourselves with that, because when retrieving the question title to show it in the preview we used a callback of the form apiCallbacks["meta.stackexchange.com"], which the new restrictions don't allow anymore. From the next build on, we'll use apiCallbacks.meta$stackexchange$com instead, which is still legal.

* This was not even two days ago, so either your "week or two" is your recollection messing with you, or something else is going on – but after this fix it does seem back to working, so I'm inclined to pick the former.

102
Amusing 404 "Page Not Found" Images for Trilogy sites?
25
What limitations does converting question links to links with titles have?
304
The future of meta.stackoverflow and meta.stackexchange
17
Chat room links with text after them get converted into one-boxes
580
We're switching to CommonMark