Why are top users of a tag ranked solely by score?

When looking at the "Top Users" page of any particular tag, (http://{site}/tags/{tag}/topusers) both the "Top Answerers" and "Top Askers" sections show the total score and the count of posts that use the tag, for each user. These numbers are sorted by total score, and there is no mechanism for sorting by count.

IMHO - this isn't very useful, nor is it fair. The score is based on up/down votes, which is impacted by the age and popularity of the question or answer. It doesn't help determine who is most active on the tag.

For answers, sorting solely by score artificially increases the rank of answerers that have made only minor contributions. As an example, here are some of the top answerers of the datetime tag on StackOverflow: 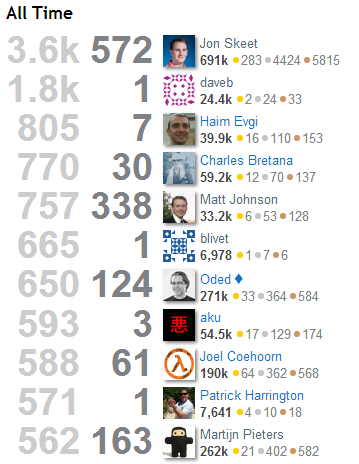 Daveb is in second place with only one question answered. That answer is correct, but it is also fairly trivial. It doesn't demonstrate expertise in the topic of the tag, it just describes something that's easily found in reference documentation. Does daveb really deserve to be ranked higher than Martijn Peters, Oded, or myself?

The problem is compounded by the fact that the top 5 all-time answerers are shown in the sidebar of the tag wiki: 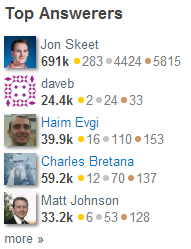 So when someone is reading the tag wiki, they may be led to believe that these are the proven subject-matter experts.

Similarly, the top askers of the same tag only have asked one or two questions. How is that useful to anyone? If I'm looking for people that are interested in a tag, I'd rather find an asker of 50 questions that have only earned a few upvotes each than to find someone with one good (or lucky) question.

I've noticed this on many tags across the StackExchange network, so I don't think it's limited to StackOverflow.

I propose one of the following:

Am I correct in this assessment? Or is there some other reason why the score is the only factor taken into account?

discussion feature-request tags top-users
share|improve this question
edited May 23 '17 at 12:36

873
Why aren't people voting for questions?
25
How is the 'Score' on the Top Users page calculated?
9
Can I Get More than the Top 20 on the top users page?
2
Tag Info | users | total score
251
A real solution to ambiguous tags
522
The current review system encourages fake reviews; some people upvote everything rather than actually fixing problems
2218
Firing mods and forced relicensing: is Stack Exchange still interested in cooperating with the community?