Refund close votes for questions deleted on the same day

When a question is deleted the same vote-day as it was closed, refund the close votes cast on the question.

There are three situations where this comes up:

In these situations, the close votes were either unneeded or a means to an end of getting rid of the crap (and if the close to allow the speedy delete votes wasn't done a moderator might have just nuked it). So, refund these close votes.

Part of the issue is that I sometimes find myself holding back on closing obvious crap (its at -4 and 3 close votes) because I won't be able to address other questions that need closing.

Or a question about career advice (close it quickly so it doesn't get any answers that make janitorial work later harder) close and comment? or just comment hoping the OP will self delete it? And if I just comment someone else might answer when its sitting at 4 close votes and I didn't close it...

A classic example of such where refunding the close votes spent is:

though having days where my close vote history looks like:

or for the first 12 of my 24 daily close votes, five being deleted already: 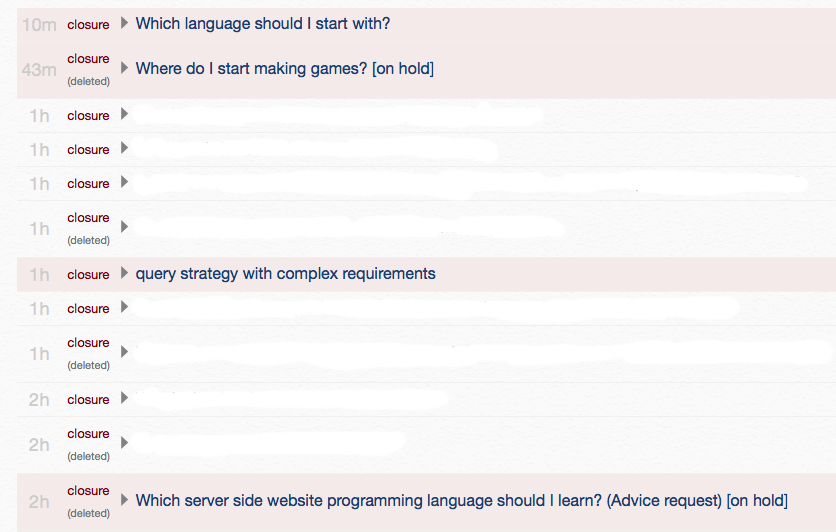 and then a few hours later... 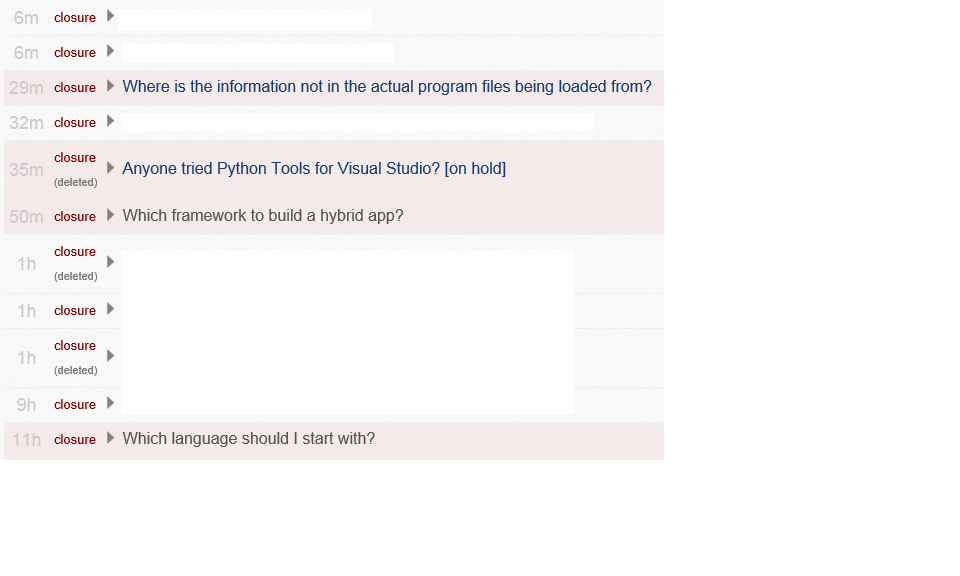 On sites where close votes or community moderation is a scarce resource, the ability to get back close votes of things that were closed and deleted rapidly can help facilitate better and more prompt (closing the question) feedback to the original poster and improve (or maintain) the quality on the site.

In the past day on Programmers I have had six votes on questions that were deleted the same day. That accounts for 6/24 = 25% of my votes for the day.

By lunchtime (US) we are 8+ hours away from resetting votes and typically get a few questions in need of quick closure. Sometimes these questions attract answers, even good answers (to bad questions), so closing them quickly is important. Our moderators leave those questions for the community to handle, but the community is out of votes.

Refunding these close votes is one way to give the community more votes to handle questions that need to be closed quickly but are currently unable to do so.

174
Asking days badges
28
Recover Close votes if asker deletes their own question
8
How was I able to close a question after running out of votes?

550
How about a "Vote not to close" option to counter the "Vote to close"?
852
Can we have the ability to retract a close vote before it closes?
119
Allow users to vote to close bountied questions
1247
Don't throw away all votes when a user is deleted
418
Add an "I don't understand" option for review audits
255
Increase close vote weight for gold tag badge holders
116
At smaller sites, penalize hot questions having 3-4 close votes