Review Count - Fix It or Lose It

Another meta question identified a bug that was marked as designed. To summarize the bug, the little number that appears next the Review link in the header shows an incorrect value most of the time.

I would like to propose that the feature be dropped. Honestly, I would prefer it be fixed, but the response to the question above gives me little faith that it will be. Half of the time, I click that little brown box and find out that I was lied to. There's nothing to review.

The little number no longer does the job it was created to do. 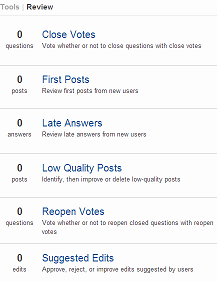 Well, here it is, three years later... Three years of complaints, bug reports, stalled discussions and abortive attempts to make that number more accurate. And I have to say...

Which is to say, we lost the review count. It is no more. No matter how we approached it, calculating an accurate count of reviews - or even just an accurate timestamp for the newest task - for the current user on every page load was simply not something that could happen without a complete redesign of review.

Upon that sad realization, we revisited the original rationale for having a counter for review:

Note that the specific suggestion there was never implemented (too expensive) - we punted and threw the total number of pending reviews up for users with 10K+ rep, thus fulfilling the prophecy contained in that same request:

...as well as generating endless confusion as to what the number even meant.

But there was a small side benefit to it, annoying though it was: if you were the only active reviewer on a site, you couldn't ignore the fact that your peers weren't pulling their weight - if no one else was reviewing, the number would just keep going up.

These were the base requirements then:

Now... There are some previous use-cases that aren't in those requirements. For example: if you happen to be a moderator and the only reviewer on a small site, the number worked perfectly for you and its replacement is not going to work as well. This was never really a goal for review though.

So with those requirements in mind, we replaced the number with a simple indicator, triggered based on one or more queues exceeding a per-queue (and per-site) threshold. When chosen correctly, those thresholds should represent a level at which there are an insufficient number of active reviewers - thus fulfilling requirements #1 and #3. The thresholds should also be sufficiently high that discrepancies between the cached task counts and what the current reviewer can actually review don't matter - thus fulfilling requirement #2.

Needless to say, this isn't the conceptually-elegant, trivially-scalable system we wanted: it's likely going to take a lot of tweaking of those thresholds to make it work effectively. But it has a distinct advantage over all those other ideas we've been batting around for the past 3 years: it's actually been implemented and hasn't brought any site to a grinding halt.

The number indeed serves little purpose now. I suggest highlighting the link when reviews are waiting in one or more queues:

I really think it is important to have that number broadly accessible to the most trusted users on the site. If it's hanging there for too long, there is a problem.

That said, I agree that there are issues with how it's displayed right now. I recommend the following:

This would then continue to allow you to keep tabs on the state of the queue, while removing the need to keep clicking through to see if you'd missed something. It would not necessarily guarantee that you'd only visit review when there was something for you to do - caching, other reviewers, and various eligibility requirements could conspire to still highlight the number when there is nothing to review - however, this should happen less frequently and less persistently.

Not sure yet if this is feasible, but... I'll find out.

Not the answer you're looking for? Browse other questions tagged feature-request status-completed review top-bar .

2
The maddening brown review number in the navbar displays the wrong number
1
Orange link that used to be suggested edits is now all review
46
Notify users of possible reviews on toolbar
49
How does the review-needed indicator work exactly?
32
What does the number next to the review link in the top bar actually mean?
43
Reliable count of votes that I've cast today
53
Notification for reviews shows way too many
26
Modulate the review notification's color to reflect changes, or make it dismissible
13
Can / Should the review count indicator be changed to be colour-coded status instead of numerical?
26
Please dim the color of the review task counter when there are no actionable tasks
See more linked questions