While cleaning up the review queue on one of the SE sites I noticed I accomplished something pretty cool: 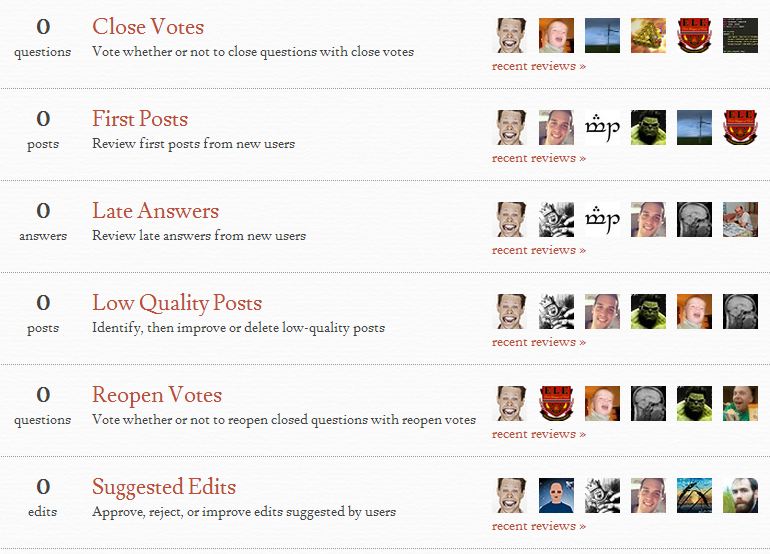 I cleared the entire review queue! Every review type was at zero and I performed the most recent review on all of them. This happened on August 16th, 2014. I actually did it on July 10th as well, but I think the two in a row was a fluke for this site.

I think encouraging users to do review tasks could use a boost and a badge for this accomplishment would help. I think the description should be something like:

Be the most recent reviewer on all review tasks while each review queue has zero items available for review (ie clear the entire review queue).

Badge metal: I'm tending toward Silver. It is likely impossible to get this on SO, while on other sites you can probably get pretty often. I did this on Christianity.SE, where I think this might happen once or twice a year (I'm pretty aggressive with the review queue there). I'd like another Gold badge opportunity, but I don't think it is that hard to get on most SE sites. I also suggest that it is unavailable for beta sites.

On a side note, it would be extra fun if the badge automatically took a snapshot of it and showed it to you when you hovered over the badge in your profile.

I agree that was a pretty cool situation, but it's not one that makes for a good badge.

To consider what behaviour this rewards, let's consider the circumstances under which you can get this badge reliably:

Badges don't really exist just for lucky/obscure situations, and the latter behaviour is outright unhelpful because we'd rather people do every individual review ASAP. So you get rewarded for luck or negative behaviour, followed by doing your reviews. The only constructive behaviour rewarded here is for doing reviews (which we already have a reward for). But this badge rewards you for doing them specifically in a bad way - postponing them as much as possible - so it doesn't make for a good badge.

Also, to be clear, the number of items displayed as available in a review queue is the number of reviews requiring your own action. Reviews you have already performed are excluded from that count, bar caching updates. So if all review queues say '0', that just means you've done all of your own review tasks - there may still be review items waiting for other users.

But there's other badges that reward situations outside your control!

Sure, but they don't require such unlikely luck. The rare few that require an element of luck have the elements outside your control influenced by constructive behaviour, so it rewards that behaviour.

The only real outlier is Tumbleweed, which is a sort of "we're sorry, please don't go away!" compensation badge.

536
The current review system encourages fake reviews; some people upvote everything rather than actually fixing problems
13
Does the review queue page show only reviews requiring your action? Does it differ, and when does it?

1237
Don't throw away all votes when a user is deleted
536
The current review system encourages fake reviews; some people upvote everything rather than actually fixing problems
390
The robo-approvers are killing my will to review edits
41
Let the community add a few data queries to the review queue
127
Let's get rid of the 10K flag queue
189
Can we raise the bar for reputation for late answers to bypass the review queue?
105
What criteria should we use to determine which review queue indicator a site will have?
66
Improving Review Queues - Design overview II: Changing review bans and other new features
121
Visual design changes to the review queues
229
Review queue workflows - Final release