As Stack Overflow has grown, it has become increasingly clear that we're going to have a significant amount of unsold ad inventory for the forseeable future.

Thus, we'd like to put that space to good use, by featuring useful open-source programming projects in the sidebar ad slot. 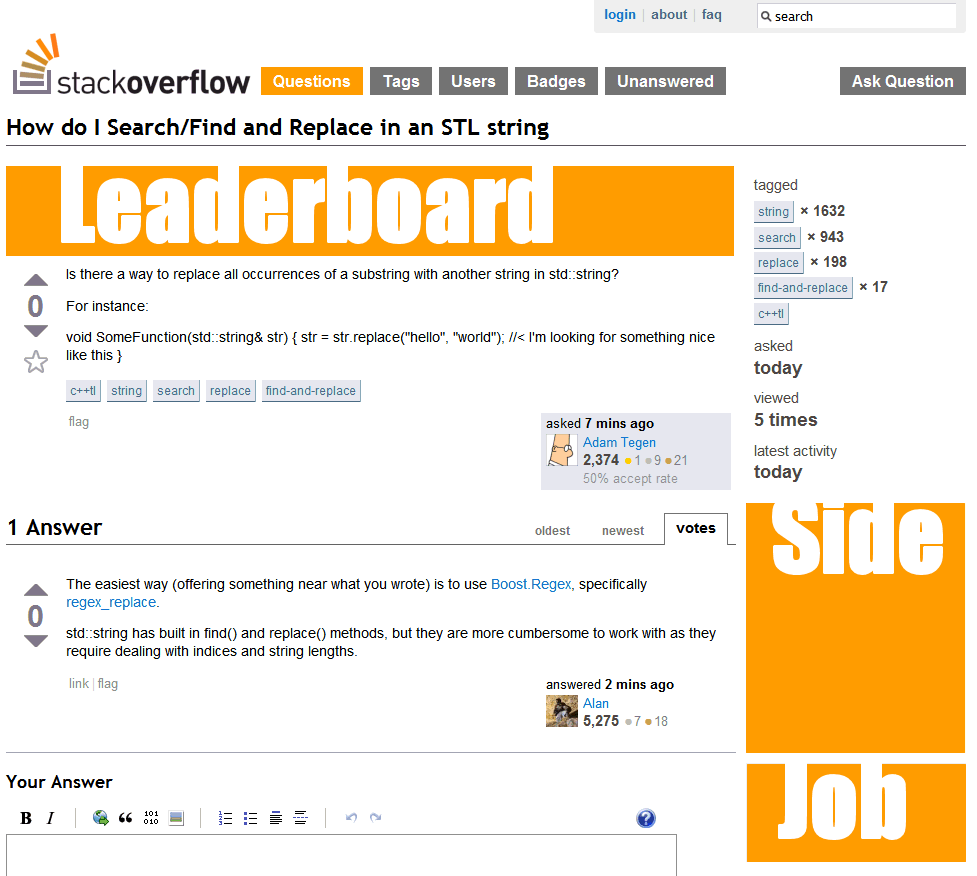 (remember, the leaderboards are hidden for any user with >= 200 rep, but not the sidebar)

Current plan: we think we can do this by leveraging meta.

This way you guys can control what appears in that ad slot, and it can be driven by popularity and interest. The ad engine will periodically poll the RSS for the question and format the top (n) answers by votes into a public service ad for that open source project.

We would likely have a narrow whitelist of known code hosting sites like SourceForge, GitHub, CodePlex, and so on. Only links to projects on those sites would be considered valid and eligible for appearance in the sidebar ad slot.

We figure we can pull RSS for the project page, or worst case, write some Q&D regex template code for each of the ~8 whitelisted code hosting sites to get relevant information for the open source project.

this is now implemented at
https://meta.stackexchange.com/questions/tagged/open-source-advertising

made public on the blog at
https://blog.stackoverflow.com/2009/12/free-vote-based-advertising-for-open-source-projects/

This is good, but wouldn't it open up more possibilities if we didn't restrict the projects to a short list of pre-approved project sites? Yes, I know this allows the data to be easily pulled from those sites, and that brings me to the meat of my plan: instead of a simple "X is the highest regarded Y and here are some details about it" type thing, we instead task Welbog with writing up a discursive, needlessly opaque review of the product.

I think this solves a few problems in one fell swoop. Specifically, it:

It's pretty much a win-win, as you can easily see.

Now that we've all agreed that this plan must be enacted, let us move on to the logistics. Of course the first issue is compensation. Thanks to the international exchange rate of baked goods, compensating him with donuts is much cheaper than paying him would be. Still, the point is not to spend any money at all, and donuts do not grow on trees (they must be hunted). However, while I know he will work for donuts, I suspect he will also work for fear of the whip. Thus we need volunteers to go to Welbog's house and whip him whenever he slacks off. I have a feeling we will have an overabundance of people willing to perform this task.

Second is the issue of Welbog's ability to review each piece of software. Welbog refuses to use any operating system other than the One True OS (MINIX). In addition, he also refuses to touch a Mac, due to a drunken brawl with Steve Jobs that escalated wildly, ultimately resulting in the formation of the Grand Canyon. But so what? Nobody enjoys Welbog for his well-reasoned, intelligent discourse on topics he knows well. Just give him some screen shots, a rough description of what the program is supposed to do, and tell him whether it parses XML with regex, and let him go to work. Let's not complicate the process, right?

Finally, there is the question of how we maintain a high output of reviews to keep the site fresh and current. This has the simplest solution of the three problems, although it is dependent on slavery being legal in Canada. What's that? It isn't? I suppose there are two alternate solutions then:

In conclusion, I think my proposal is both the most complete and practical of any put forth. For the good of the site -- nay, for the good of the world! -- I implore you all to vote for my plan. If we don't, then the sex change experts have already won.

Before I poo-poo this idea, let me start by saying that Jeff and I have been discussing donating advertising space to Open Source projects for a little while now. I'm a big fan of this and would like to this sort of thing happen. But not through automation.

Automated ads are low quality and simply do not work. The Great and Exalted Google miserably failed on Stack Overflow with AdSense (Podcast #64). The custom-built automated amazon ads (built specifically with our audience in mind) has run into a host of issues. Do we really think automagically scraping and formatting text (maybe logos) will be the exception?

The advertising space on Stack Overflow is very valuable, and quite a many companies recognize this by continuing to advertise on the site. We maintain the high value by disallowing animated, obnoxious, and low quality advertisments. When we lower our quality standards, we devalue the space.

And then there's the fact that you can't just throw advertisments on a site and hope it works. There's a whole process involved to ensure success - from developing a message to designing the banners - and that process requires all sorts of hard work. Blasting low-quality ads will deliver minimal results, and that benefits no one. Worse, it puts in a chink in our Responsible Advertising program.

All that said, here's my counter-proposal.

In response to Alex's counter-proposal...

That said, here is a counter-counter-proposal:

This solution would scale (no attention required from Alex or the StackOverflow team) while allowing for full artistic expression in the ads themselves.

We could also leverage the power of tags so that everybody sees an open-source project that they are interested in. Here's how it would work...

This is certainly more complicated than Jeff's proposal, but it allows different audiences to "self-select" for different open-source software advertisements. 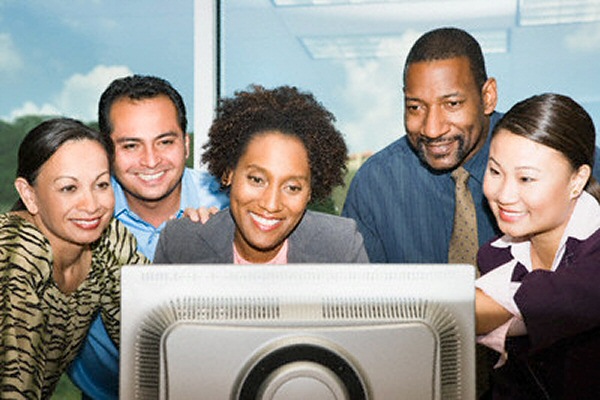 Sounds good - and it provides a legimate way for people to advertise OSS through contributions - rather than being spammy.

Of course, when I mention any high performance binary serialization frameworks for .NET (that happen to rhyme with frotohuf-bet) it isn't spammy at all...

Nice idea. But I really don't see why you would want to exclude self-hosted projects. I, for one, am glad that my project moved aways from sourceforge which was a constant pita.

I like the idea of promoting Open Source projects, particularly those that aren't already that well known. I agree with Alex though, that it's probably best that it's not fully automated. Make the people who want to promote their project do some work to make for better ads. Get them to fill in a form, write an x-word description and/or provide an ad image.

I just heard this idea listening SO #69 and love the concept.

I think some degree of emphasis should be given to raising visibility for lesser known tools. If the stack overflow open source ad (SOOSAD) list is populated with nothing but the Most Active or Most Downloaded projects already indexed on the respective source code hosting sites, then the cool quotient of SOOSADs will be pretty low.

I wonder if you could use stackoverflow questions and answers as source data to find little known tools. For example, if a post has a particular tagged "tool", is heavily upvoted, then scan the post url's, and see if that url is a project page on one of the source hosting sites. That kind of automation might miss the point since the tool may not be why an answer was heavily upvoted.

How about using Freshmeat as a data source? The data quality may not be as high, but it includes self-hosted projects as well as those on the major code hosting sites.

Like it. I would think you might also want something to keep that monthly question more visible so it doesn't fall off the main page. Keep it visible so people will contribute to it. Maybe have Community kick that special tag once a night or something so it stays visible. Or a small link to the current month's question at the top of the sidebar maybe.

Automatically extracting information from the project hosting sites is likely to leave you with extremely low quality information. I've used both SourceForge and now Google Code and decided a long time ago to give up on the project site as the primary home page for the project. Instead I use the real site for users, and the Google Code site for developers and bug reports etc. If you crawled my project, you'd get nothing interesting for users.

I would suggest that either someone involved with each project or a project sponsor suggests their project (as Alex suggests). Use some standard format ad for those projects without a graphical designer on board (most of them) - I sure as heck wouldn't be able to come up with an Ad that I'd want to see plastered all over Stack Overflow but would still love some advertising.

I find the idea of votes for the adverts worrying. Surely the most popular open source projects are potentially the ones that are least in need of free advertising? Don't get me wrong, everyone should be eligible for it but the jQuerys and Paint.Nets of this world are likely to edge out any small project every time. Is that right?

What about including ads to Creative Commons licensed dev podcasts as well?

Not the answer you're looking for? Browse other questions tagged discussion status-completed open-source-advertising .

180
Open Source Advertising - Sidebar - 1H 2010
41
Adobe-sponsored tags
10
Open-source ads: are they really displayed on Stackoverflow?
0
OK to mention an Open Source project in SO post?
29
Careers.StackOverflow for freelancing work?
8
What about Tag images for OpenSource projects?
1
Start a new Stack Overflow tag for my project
4
Can we have StackApps advertisements running on SO?
4
Make Open Source Advertising statistics available even after the ads stop running
1
Free logo on tags of open-source developments until they're filled by paid logos?
See more linked questions

537
The MIT License – Clarity on Using Code on Stack Overflow and Stack Exchange
2793
A Terms of Service update restricting companies that scrape your profile information without your permission
2510
Firing mods and forced relicensing: is Stack Exchange still interested in cooperating with the community?