I came across an answer today on Electronic Engineering: How to go from newbie to manufactured? in the Android app. The answer gives monetary figures in (presumably) USD using the dollar sign. When viewed in the app, the rendering of the answer is incorrect: 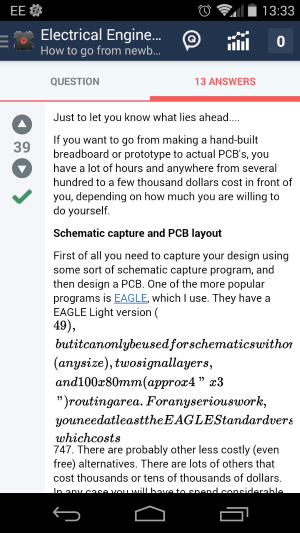 I then tried viewing the question in a few other ways, all of which rendered correctly: 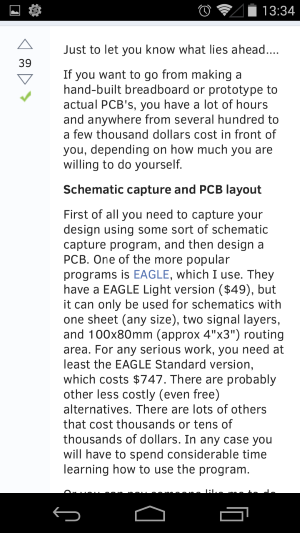 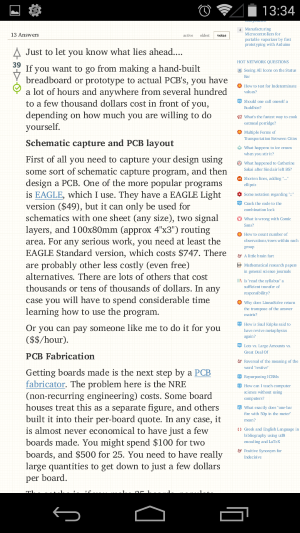 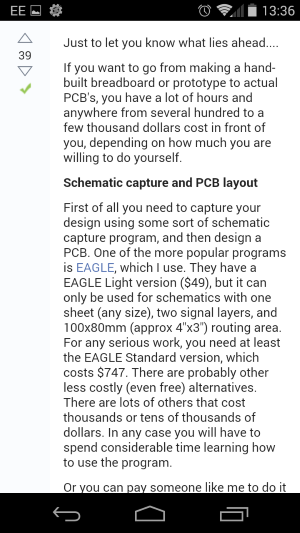 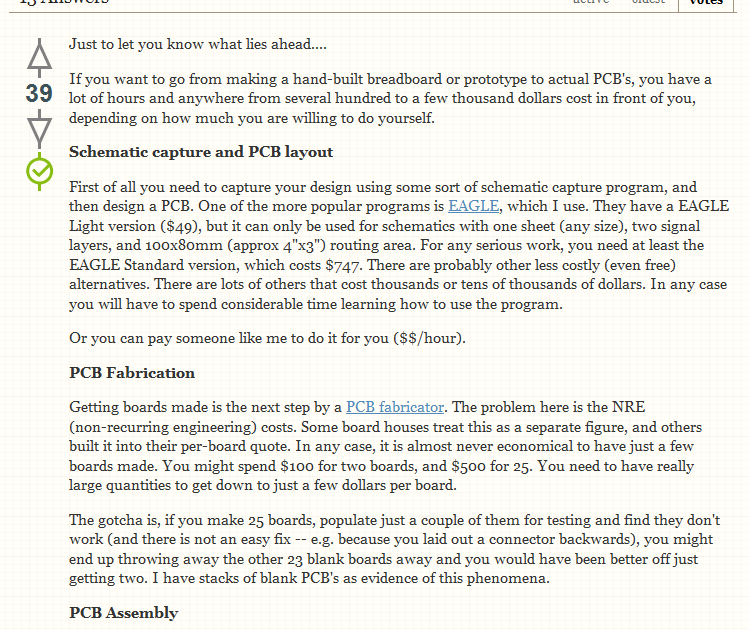 There seems to be different recommended ways of writing the raw dollar sign on different SE sites from the searches I've done (writing it raw, escape each with a backslash, surround in backticks, just write it in maths mode with backslash-dollar-dollar-backslash-dollar), but I think that the app should still render consistently with other browsers.

As of last night, the current experimental version of the API (which the app uses) returns both MathJax and EscapedMathJaxDelimiters under markdown_extensions for sites that require using \$ to render MathJax (currently only EE and Code Review), so as of the next app update the sites and app will render situations like this the same way.

So I've spent a good chunk of today playing around with this and have reached two conclusions:

What makes this worse is if you go on one of the sites with the default inlineMath attribute like math.stackexchange.com, you can recreate this issue. If you post anything that includes two dollar signs all of the text gets parsed by MathJax, so the fact that the answer in question isn't being incorrectly rendered on your other screenshots is actually a weird artifact of EE having different site settings than most of our other sites.

Here's a screenshot from my local development setup, which is currently set to emulate the settings of math.stackexchange.com:

MathJax supports escaping of inlineMath attributes, by changing the dollar signs in text to \$ and I've played around with doing different regex search and replaces to do things like "If there is text between two dollar signs and it looks like regular text, not LaTeX, switch the dollar signs to escaped dollar signs" but I've so far been unable to figure out a way to reliably do this that doesn't mess up actual attempts at using MathJax.

Basically, I'm at a loss on what to do here, and you can recreate the bug by visiting a site that uses our normal MathJax settings (math.stackexchange, mathoverflow, CS, stats) and simply putting text between two dollar signs.

Not the answer you're looking for? Browse other questions tagged bug status-completed markdown android-app .

191
Allow us to vote to delete from the Android app
115
What are the permissions the Android app needs?
4
Android app is burning ludicrous amounts of data in the background
6
Inbox items not marked "read"
20
Number of upvotes incorrectly displayed in android app search